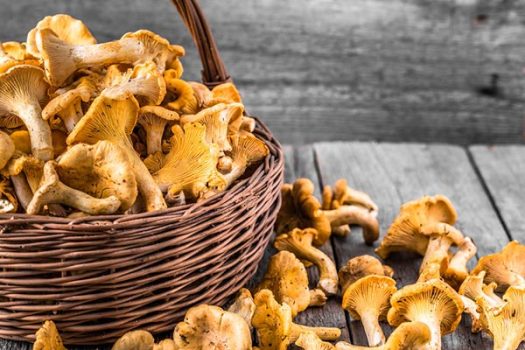 Chanterelles are one of the most delicious of all wild mushrooms.  They grow in forested regions of North America and Europe, especially in mossy areas of pine forests.

If you’re interested in harvesting chanterelle mushrooms, it is critical to know how to identify them. At first, it may be confusing, but chanterelle identification will be easier with practice, and in no time, you’ll be able to differentiate chanterelles from their look-alikes.

And once you have some chanterelles, see our article on cooking chanterelles for some recipe ideas.

Below we will give some tips on how to identify chanterelle mushrooms.  But the information we provide below is only a starting point. NEVER consume any mushroom unless you are absolutely sure of its identity.  Every year people die after consuming poisonous mushrooms.  And with some species, just one mushroom is enough to kill you.

If you are new to mushroom foraging, be sure to run your finds by someone who is experienced in foraging for mushrooms. If you are in the US, Canada, or Mexico, the North America Mycological Association (NAMA) has clubs in many cities and towns, and it is likely that there is a club near you. Visit their website to learn more.

And always carry a good field guide when you are looking for mushrooms. We are currently recommending Mushrooming Without Fear: The Beginner’s Guide to Collecting Safe and Delicious Mushrooms.

Make sure that you know how to identify common poisonous mushrooms in your area, such as destroying angels, to rule out the possibility of picking one by mistake.

While our articles provide a great overview, please don’t rely solely on the internet to identify a mushroom. This isn’t a subject on which to take short-cuts.

With all that said, here is our overview of chanterelles and how to identify them.

Where do Chanterelles Grow?

Chanterelles are most commonly found in established forest areas, both hardwood and coniferous.  They’re said to like mossy areas, although they can be found in grassy areas too.  They grow out of the ground, not out of wood.  They do especially well during wet summers with consistent rain.

When Can I Find Chanterelles?

Chanterelle season starts in mid-summer and ends in the fall with the first hard frost.  In North America, they are most common in late August and September.

How to Differentiate Chanterelle from Their Look-Alikes

Let’s understand its traits to get an in-depth idea of recognizing chanterelles.

A key to chanterelle identification is to be able to recognize false gills. They look like forked folds or interlaced wrinkles. They are easily visible underneath the mushroom and look as if they are ‘melted’ and cannot be easily removed from the cap.

On the other hand, true gills have a blade-like structure and can be picked off separately from the cap, like in the mushroom below.

If a mushroom has true gills, it is not a chanterelle.

Apart from this, other identification features in differentiating chanterelle from other mushrooms include:

Which Mushrooms Are Chanterelle Look-Alikes?

To properly identify chanterelles, it’s important to be able to identify their look-alikes.

The most common chanterelle look-alike is the jack-o-lantern mushroom.  They are quite similar in appearance but tend to be more orange in color.  The easiest way to differentiate them is the gills.  Chanterelles have false gills, whereas jack-o-lantern mushrooms have true gills that are sharp. These gills don’t run down the stem or fork.

Also, chanterelles grow on the ground, whereas jack-o-lanterns always grow on wood. Be careful to check carefully, as the orange mushroom you are looking at on the ground might be growing out of a partially buried tree stump.

Jack-o-lanterns are not considered to be deadly, but they do cause severe cramps and gastric distress, so it’s important to avoid them.

Another look-alike mushroom is false chanterelle. They look very similar to chanterelles, but they do not share the delicious flavor, and in fact, don’t taste good at all.

The main difference between the chanterelle mushrooms and the false chanterelle is the smell. The former smells fruity, while the latter smells like any grocery store mushroom.

The gills of the false chanterelle are neither true nor false. In fact, they’re somewhere in between, so differentiating them can be a bit tricky.

So remember, It’s best to follow these two parameters for the true chanterelle identification:

What Are the Different Types of Chanterelles?

Also known as orange chanterelles, chefs widely use these mushrooms to get that light pepper taste. If you like the earthy taste and almond-like nuttiness in your recipes, cook golden chanterelles. The golden chanterelles are vibrant yellow or gold initially, which further deepens into shades of orange. Their cap is wavy and funnel-shaped.

Black trumpets have the familiar chanterelle look, except that they are black. They are smaller than the golden chanterelles and even have a similar taste with a smokier undertone like truffles. They sport false gills, are funnel-shaped, and have thinner flesh. Black trumpets are difficult to find, as their hue blends in with the shadows on the forest floor.

These tiny, brightly-hued mushrooms are also known popularly as red chanterelles. They are just two inches tall, which is smaller than the golden chanterelles. Cinnabar mushrooms have perfectly formed cups and can be a great addition to any dish. However, it takes many of these tiny mushrooms to fill your basket – the reason why mushroom hunters don’t often pick them unless they find an extraordinarily abundant patch.

How Should You Hunt and Clean Chanterelles?

While mushroom hunting, it’s best to arrange to have the right supplies, including a basket, a sharp paring knife, and a pair of gardening gloves. Twisting the chanterelle out of the soil is very easy. However, it is best to cut and not twist them. Cutting them will prevent the dirt from coming into the basket. Moreover, the base will remain intact, which will lead to more chanterelles next year.

Once you pick and bring your chanterelles home, don’t make the mistake of directly storing them in the fridge without cleaning. This will evaporate the moisture, and it will eventually become increasingly difficult to remove the dried dirt from these mushrooms.

Break your chanterelle mushrooms in half and use a toothbrush to remove the dirt. Seal them in a paper bag, and then store them in the fridge. It’s best to consume them within ten days. Storing them while they are damp will shorten their lifespan, so ensure that they are dried completely before storing.

Cooking chanterelles can be easy or complex – it all depends on how you want them done. You can pair these mushrooms with a variety of ingredients, including thyme, tarragon, chervil, and chives.  See our article on cooking chanterelles for some ideas.

If you have found extra chanterelles and want to preserve them, you can dehydrate them and later powder them. This preservation method can save a lot of storage space as 20 pounds of fresh chanterelle mushrooms can be powdered and fit into one small jar. You can then use this powder to flavor your stocks, stews, and soups.

You can also freeze chanterelles.  To do so, sauté them in butter or oil for around 15 to 20 minutes and let them cool off. Then, you can put them into Ziplock bags and store them in the freezer.

Storing your frozen chanterelles will take up more room than dehydrated chanterelles; however, it is an ideal storage method if you wish for the mushrooms to retain their original flavor. They won’t have the wonderful fresh chanterelle texture, but they are still great in risottos, pasta, and soups.

Chanterelles are delicious and versatile and can be used to cook a wide variety of dishes. They go well with all kinds of meats and sauces, so they are an excellent addition to your foraging skills.

However, as said earlier, it is important to identify the true chanterelle there are some lookalikes that can cause severe cramps or digestive problems.

So, consider their identification features, compare them with their look-alikes, and only pick them if you’re confident that they are none other than chanterelle mushrooms.

To learn how to forage for other types of mushrooms, see our article Mushroom Foraging — The Ultimate Guide. 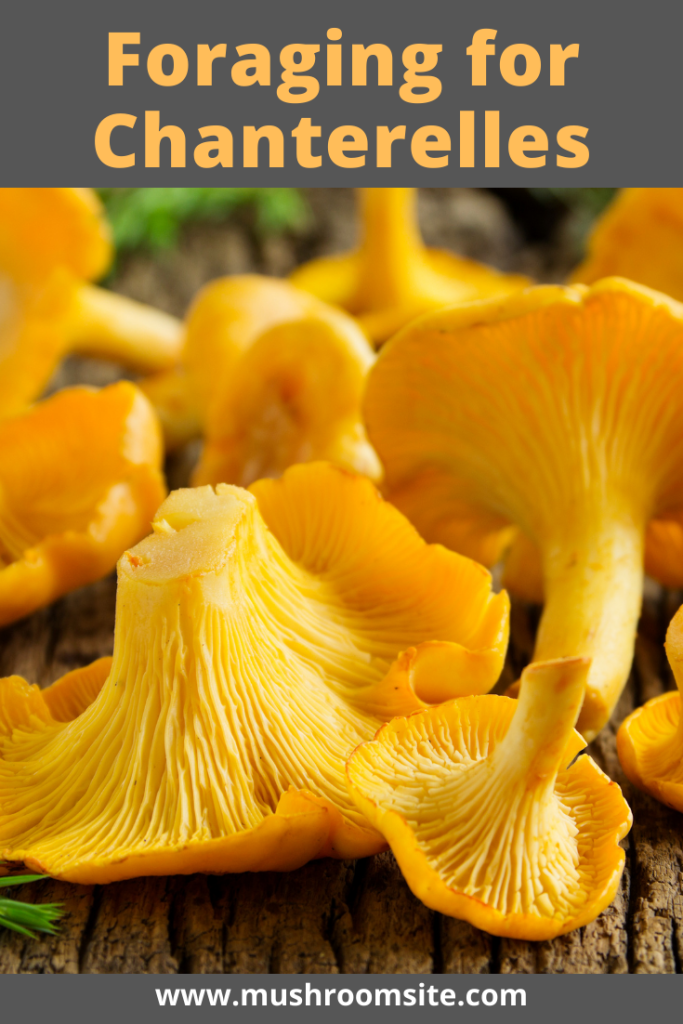