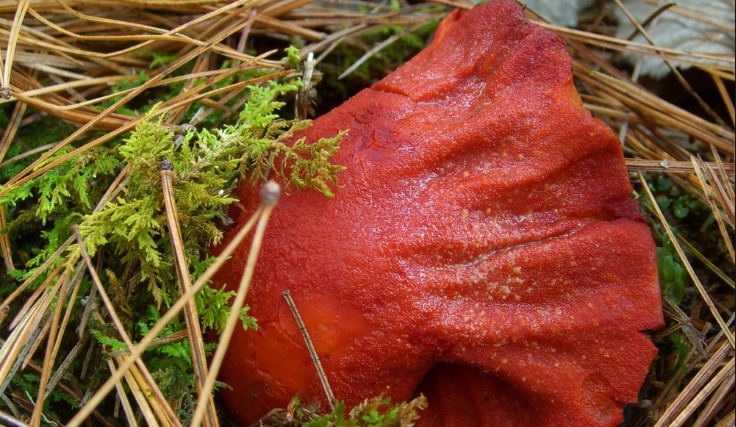 Have you heard about mushrooms called “lobsters”? We wrote about them extensively in our Complete Guide to Lobster Mushrooms, but today, we are going to share some amazing lobster mushroom recipes. So if you can get your hands on some, you’ll know how to use them.

Don’t judge them by their name, as lobster mushrooms are not a type of mushroom, but a result of a parasite fungus named Hypomyces Lactifluorum which infects certain species of mushrooms. Here, the lobster- mushroom infection covers the host in a hard, red-orange shell. This shell completely alters the mushroom’s shape, flavor, consistency, and even its DNA.

Lobster mushrooms don’t look like regular mushrooms. They have cracked caps and little to no stems. The caps are firm and textured, with split, wavy edges. The gills are mostly missing beneath the parasite fungus, and the gill area is disfigured and rippled.

When you slice a lobster mushroom, you can see its white flesh, which is spongy, dense, and has a seafood-like aroma. The mushrooms have a chewy texture, with a subtle woody and nutty flavor.

You need to cook lobster mushrooms thoroughly. They are best suited to sautéing, baking, and braising. Consider adding them to your pasta recipes, soups, omelets, seafood, or stir-fries, or they can also be cooked in cream-based sauces, stews, and terrines.

Where to Find Lobster Mushrooms

Of course the best place to find fresh lobster mushrooms is in the forest, and we give some tips for finding them in our Complete Guide to Lobster Mushrooms,  But if your mushroom hunting skills are not up to snuff, you may find them in your local farmer’s market, or even specialty grocery store.  Remember that their season is late summer and fall. Given the difficulty of growing them commercially, you will most likely not see fresh ones at any other time of the year.

West Coast Wild Foods Dried Lobster Mushrooms are by far the best dried lobster mushrooms that we have sampled. Wild-picked in the Pacific Northwest, they are expensive.  But they come the closest to the real thing that I have found.

Now, let’s explore some of the delectable lobster mushroom recipes you can try this weekend!

Step 1: Take a medium saucepan and add kombu along with 5 cups of water. Bring the mixture to a boil. Once it is boiled, turn off the flame and let it sit for 20 minutes. Discard the kombu.

Now, add bacon to the resulting broth and bring it to a boil again. Reduce the flame as soon as it starts boiling. Let it simmer for 30 minutes. Later, strain the broth using a cheesecloth. Don’t forget to skim and discard any fat you see on the surface.

Step 2: Transfer the broth to the saucepan again and bring it to a boil. Add mushrooms and reduce the flame. Simmer the entire thing for the next 3 minutes. Add soy sauce, bok choy, and rice wine vinegar. Lastly, garnish it with cilantro.

Want to check out the nutritional facts and chef’s notes for this recipe? Click here: Nameko and Lobster Mushroom Soup.

Step 1: Begin with cleaning and processing the asparagus. Determine whether its stalk is tender or not by breaking their bottoms. Now, cut the remaining stalks at the point where the asparagus sets apart.

Once cleaned thoroughly, place it on a baking sheet and drizzle some olive oil over it. Bake them at 400 degrees F for around 15 to 18 minutes or until they turn soft. Once done, chop them roughly after removing them from the heat.

Step 2: Chop the lobster mushrooms roughly. Take a small sauté pan, add 1 tablespoon of butter, and sauté the chopped mushrooms for around 3 to 5 minutes or until they turn soft.

Step 3: Place 2 tablespoons of butter into a saucepan and add Arborio rice to it. Stir over medium heat while ensuring that every grain is toasted evenly. Add the stock. Begin with one cup at a time, and let the rice absorb all the liquid. Remember to stir it frequently.

Step 4: In around 15-20 minutes, the rice will turn soft. Now, add the remaining tablespoon of butter along with the parmesan cheese. Stir in the roasted asparagus and top it with the sauteed lobster mushrooms. Serve and enjoy.

Click here for more detailed information regarding the ingredients and the recipe: Asparagus and Lobster Mushroom Risotto.

Step 1: Take a pan and sauté onions and lobster mushrooms in olive oil. Next, throw in a sprig of chopped oregano and season the mixture with salt and pepper.

Step 2: Once done, remove the pan from the heat and add in the cream. Stir it thoroughly until you get a thick, creamy sauce.

Step 3: Take readymade tart pastries and fill their centers with the creamy sauce.

Step 4: Bake the tart pastries in the oven at 190 degrees F for around 15 minutes, or until the pastries have become puffed and golden brown.

Step 5: Sprinkle with the rest of the fresh oregano and serve.

Credit for this easy and yummy recipe is due here: Creamy Wild Mushroom and Onion Puff Tarts.

Step 1: On medium-high heat, sauté the lobster mushrooms with oil and salt for around 15 minutes or until they start turning brown. Then, add smoked paprika and garlic to the pan. Stir the mixture for a minute and turn off the flame. Transfer everything to a bowl and allow it to cool down.

Step 2: Once the mushrooms have cooled down, mix them with all the lobster salad ingredients mentioned above.

Check out this link for more information on this recipe: Lobster Mushroom Rolls.

Step 3: You can serve these with hot dog buns. For this, spread butter generously and toast or grill the buns. Once done, serve the mushroom mixture on the buns. Don’t forget to season the lobster salad with chives before serving.

Step 1: Take water, add salt, and bring it to a boil. Boil the spaghetti by following the packaged instructions. Once boiled, drain and toss with a bit of butter or oil.

Step 2: Heat a skillet over medium-high heat. Melt the butter. Add garlic and sauté it for a few seconds until it creates a raw aroma.

Step 3: Now, add mushrooms and some salt. Sauté this mixture for 10 minutes or until the mushrooms turn soft. Last, add the lemon juice to the mushroom mixture and adjust the seasonings if required.

Step 4: Place the spaghetti in the serving bowl and top with mushrooms and cheese. The lobster mushroom spaghetti is ready to be served.

Want to know another option for frying the lobster mushrooms for this recipe? Check this out: Lobster Mushroom Spaghetti.

Which recipe did you like the most? Share your experience with us in the comments.  And check out our recipe page for more delicious mushroom recipes.

Have you heard of pheasant back mushrooms? They are one of the most underappreciated mushrooms, even…

Maitake (Hen of the Woods) Recipes – 5 Ways to Cook Them

If you’re craving a strong mushroom flavor, adding maitake mushrooms to your recipe can be your…

Porcini mushrooms are wild, brown-capped mushrooms that have a deep, woodsy, earthy flavor and give a…