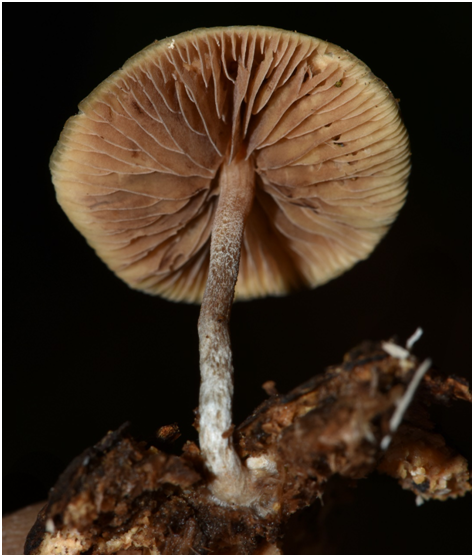 Psilocybe caerulipes is also known as the blue-foot psilocybe. It has a distinct blue hue at the base of its stem, which gives it its name. It is the rarest psilocybe mushroom of all, and is highly sought after both for preservation purposes and for genetic engineering.

Below we will give some tips on how to identify blue -foot psilocybe mushrooms.  But the information we provide below is only a starting point. If you don’t have experience hunting for mushrooms, buy a detailed guide.  And be sure to go hunting with an experienced forager.  NEVER consume any mushroom unless you are absolutely sure of its identity.  Every year people die after consuming poisonous mushrooms.  And with some species, just one mushroom is enough to kill you.

Here is a detailed look at the blue-foot psilocybe.

The blue-foot psilocybe is also known as agaricus caerulipes, or simply the blue foot. It is a member of the hymenogastraceae family.

The mushroom caps of the blue-foot change their shape from conic to convex as they mature. The caps grow between 1 to 2.5cm. Their margins are initially inwards, but they later assume a convex shape and then flatten out. The outer surface of the margin has a moist gelatinous pellicle. As the shrooms mature, the caps’ surfaces become dry, shiny, and translucent. They have a nipple-like protrusion at the center of the cap, on the apex.

The gills grow close to each other, almost looking crowded. They are narrow with sinuate attachment. The gills of young blue-foot psilocybe are light brown but become rusty cinnamon brown as the spores emerge and mature. Their edges are white and slightly fimbriate.

They are thick, ellipsoidal, and dark purple-brown. The spores have a broad germ pore.

The stipes (stems)  of the blue-foot psilocybe grow up to 6cm long and 3mm thick. While some have a uniform thickness throughout the stem’s length, others become thicker at the base. Initially, the stipe is whitish in color, but it becomes bluish as it dries. The base of a blue-foot psilocybe is bluish, hence the name blue foot psilocybe. When bruised, other parts of the stem will slowly turn bluish.

The stem looks powdered at the apex, but it has whitish – greyish fibers at the base. The stem of a young psilocybe caerulipes is fleshy, but it becomes hollow as the mushroom matures. While the stem has no annulus, once the veil sheds, an annular-looking, fibrillose zone forms on the stem’s upper part.

Psilocybe caerulipes has no odor, but it has a floury taste.

The psilocybe caerulipes grow solitary or in small clusters in deciduous forests. You can find them on plant matter, hardwood debris, beech, birch, maple, or decaying hardwood logs.

Blue foot mushrooms have been found across Eastern North America and also in Mexico. They are rare, and are often overlooked by foragers as being just an unfamiliar little brown mushroom.

Blue foot mushromms fruit from late May through December.

Blue foot mushrooms have a low to moderate potency and are preferred for mild tripping.

Once consumed, the effects begin to be felt within the first hour, peak within 2 hours, and plateau between 4 and 6 hours. Those effects can last between 4-12 hours, depending on the tolerance of the use.

Some effects of consuming psilocybe caerulipes include dilated pupils, increased heart rate, nausea, hallucinations, difficulty focusing, and distortion of vision, among others. Some users report having positive effects from consuming blue foot mushrooms, including feeling calm and having a sense of connection with others.

Similar to other magic mushrooms, psilocybe caerulipes are not thought to cause addiction or toxicity in the blood. Studies have shown that psilocybin does not affect electrolyte levels, enzyme levels, or liver enzymes’ functioning.

Unlike other narcotics drugs when they begin to wear off, the comdown phase from psilocybe caerulipes and other psilocybin mushrooms is said to be rather pleasant. Trippers report feeling mellow, calm, and introspective as the psychedelic effects begin to dissipate.

Psilocybe caerulipes and other psilocybin mushrooms are also illegal in most countries in Europe, including in Ukraine, Turkey, Taiwan, Sweden, Switzerland, Slovenia, New Zealand, Croatia, Bolivia, Denmark, Germany, Finland, Latvia, and Norway, among others.

In Spain, the personal use of psilocybe caerulipes and other psilocybin mushrooms is allowed.

There are no regulations or rules in Jamaica, Samoa, Jamaica, Nepal, and Brazil, against psilocybe caerulipes or any other psilocybin mushrooms

The blue foot mushroom  is one of the rarest types of magic mushrooms. The legalities surrounding selling and purchasing blue foot spores and those of other psilocybin mushrooms can make it difficult to find their spores for cultivation.

The psilocybe caerulipes can be consumed in various ways, including as an ingredient in other culinary recipes, whether raw or steamed or brewed in tea.

Magic mushrooms have been around since 10,000 BCE. However, scientists did not explore their mind-altering features until in the 20th century.

In the ancient history of the Maya and Aztec, psilocybin mushrooms were used for spiritual and therapeutic purposes. The Central American artworks indicate that the magic mushrooms were used to communicate with the gods. This is evidenced by the naming of some of the magic mushrooms. For instance, the Psilocybe Mexica was referred to as Teonanácatl, which means “flesh of the gods.”

Similarly, in Ancient Greece, during the worship of goddess Demeter, a ritual involving a psychoactive brew was carried out. The brew was made from psychoactive mushrooms.

In modern history, the first incidence of mushroom intoxication was recorded in 1799, in Britain. A family picked some mushrooms along the shores of Thames River for their meal. They started to experience effects such as pupil dilation, euphoria, and hysteria soon after consuming the mushrooms. Unbeknownst to them, the mushrooms that they picked and eaten were Psilocybe Semilanceata.

The magic mushrooms began getting attention from scientists in the 20th century. In 1957, R. Gordon, an enthusiast of magic mushrooms and a banker, went on a trip to Mexico, where he learned more about magic mushrooms. Upon returning to the US, he wrote an article, ‘Seeking the Magic of Mushrooms, ’ which stared up more interest in psilocybin mushrooms.

Throughout the mid 20th century, people were experimenting with magic mushrooms. In 1970 the US-made possession, sale, use, and cultivation of magic mushrooms illegal. Some states, such as California and Colorado, have decriminalized magic mushrooms.

Blue-foot psilocybe are a rare, but sought after psyechedelic mushroom that grows in the Eastern United States and Canada.  They are mildly potent, and if consumed in low doses, they cause a mild trip.

Learn more about magic mushrooms and how to identify them in our The Easy Guide on How to Identify Magic Mushrooms.

Get In Touch
Copyright MushroomSite.com, 2020. All Rights Reserved.
Back To Top
×Close search
Search
Do NOT follow this link or you will be banned from the site!