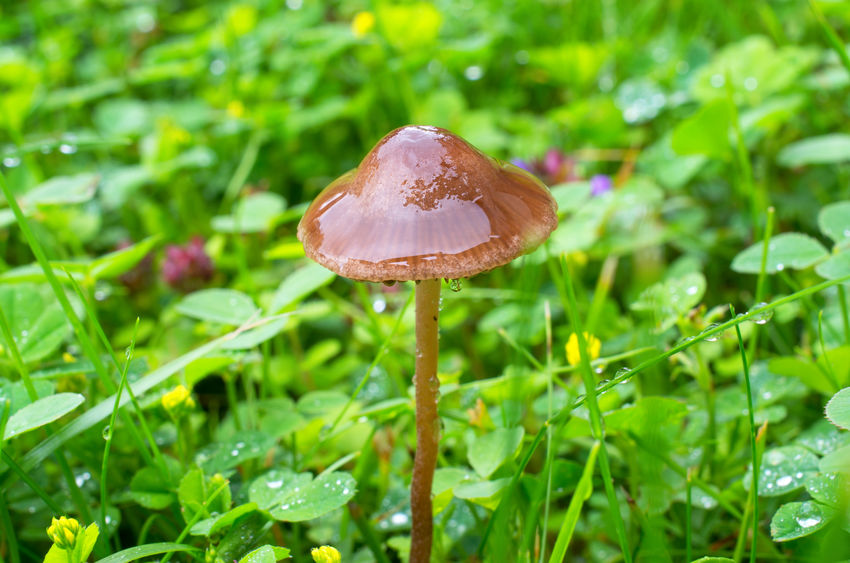 Psilocybe Semilanceata is a species of magic mushrooms with psychedelic effects,  They are commonly known as Liberty Cap mushrooms, and can be distinguished by their pointed, conical-shaped caps. They mainly grow in wetlands across warmer parts of the world.

Liberty Caps have average psilocybin potency and can be consumed in different ways.

Below is a detailed look at these magic mushrooms.

The information we provide below is only a starting point. If you don’t have experience hunting for mushrooms, buy a detailed guide, and be sure to go hunting with an experienced forager.  NEVER consume any mushroom unless you are absolutely sure of its identity.  Every year people die after consuming poisonous mushrooms.  And with some species, just one mushroom is enough to kill you.

The first recorded case of psychoactivity of the liberty cap was in London in 1799. A family had picked some mushrooms in a park for their food. After consuming the mushrooms, their pupils dilated, and they went into a state of delirium.

For a long time, mycologists did not understand why psilocybe semilanceata had mind-altering effects when consumed. However, in 1960, mycologist Albert Hoffman established that the psilocybin components in the mushrooms were responsible. In the 1970s, liberty caps gained popularity as people started deliberately using them as a tripping substance.

The scientific name for these mushrooms is psilocybe semilanceata.  Semilanceata means “half spearhead” in Latin, and the caps do look vaguely like half of a spearhead.

Mycologist Elias Magnus Fries was the first to name this mushroom species. He initially named them Agraricus Semilanceatus. However, the mushrooms were later renamed several times by other mycologists until they became known as Psilocybe Semilanceata, as named by Jacob Emanuel Lange in 1936.

While liberty cap is the common colloquial name for psilocybe semilanceata, these mushrooms are also sometimes called Phrygian caps.

As mentioned earlier, liberty cap mushrooms have bell-like, conical-shaped caps. The shape of the caps remains the same throughout the lifetime of the mushroom. The cap margin (edge) is rolled in for the younger liberty caps but unrolls to become straight as the mushroom ages. In some cases, the margins even roll upwards as the mushrooms mature.

The caps are hygrophanous, which means that their color varies depending on the moisture levels in their surroundings. The caps are pale brown in moist surroundings, but in drier environments, they are chestnut brown with a darker brown at the center. As the caps dry, they become paler and take on an almost yellowish-brownish color. When bruised, they turn bluish-greenish.

When in a moist environment, the radial grooves corresponding to the gills underneath can be seen on the caps. Wet psilocybe semilanceata caps tend to be sticky. You can see a thin gelatinous film if you peel back or break the mushroom cap. If exposed to the sun, the gelatinous film dries up, turns whitish, loses its malleability, and cannot be peeled backward. 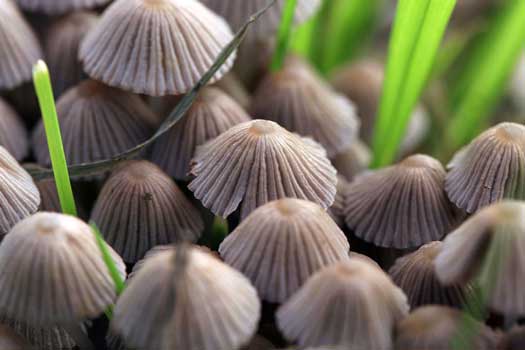 Underneath the caps, the Psilocybe Semilanceata have 15-27 narrow and moderately spaced gills. Each gill is independently and freely attached to the stem. The gills are initially pale brown, but they become darker purple-brown as the mushroom matures.

The spores are reddish, purple-brown in color.

Liberty Caps have yellowish-brownish slender stems.  These mushrooms range between 1 3/4″ and 5 1/2″ in height.  The stems tend to be thicker at the base.

Psilocybe Semilanceata has a temporary, thin, cobweb-like veil that disappears as the mushroom matures. The veil is thin and membrane-like. After fading away, the veil leaves an annular zone on the stem. The region where it was attached to the stem becomes darker as the mushroom ages.

Liberty caps flourish in high humidity and die when the temperature is too low. As a result, they mostly fruit during autumn and die in winter. They can be easily located in warmer climates between September and December.

Psilocybe Semilanceata flourishes in wetlands. Therefore, they can be found in dunes, grasslands, clay grounds, and old farms. They particularly do well on horse manure and in lands that have been enriched with artificial fertilizers.

Liberty caps do not grow on trees or in forests.

Liberty caps have a wide distribution across the world. However, they are indigenous to Europe with distribution in Germany, Greece, Hungary, Estonia, Finland, France, Spain, Slovakia, Switzerland, Turkey, and the United Kingdom. They can also be found in Pakistan and Ukraine. In the US, the liberty caps can be found in the Pacific Northwest and on the Cascade mountains’ western side. In Canada, they are located in Nova Scotia, Ontario, Quebec, British Columbia, and New Brunswick.

Psilocybe Semilanceata contains psilocybin and baeocystin psychoactive compounds. The psilocybin potency varies depending on the specific liberty cap mushroom, with an average concentration of 1% per the dried mushroom’s weight.

Magic mushroom enthusiasts have reported that it is difficult to grow Psilocybe Semilanceata. This is because they feed on putrescent grassroots, a condition that is difficult to create if you are growing them at home.

Liberty caps can be consumed in various ways, including brewing in tea, chewing them raw, or incorporating them in other recipes. They have a bitter taste, and some prefer to add some lemon juice to them to make them more palatable.

Liberty caps are considered to be one of the “friendlier” magic mushrooms and are considered ideal for beginners. Users have reported feeling happy, empathetic, and social after they consume liberty caps.

Generally, liberty caps cause mild hallucinations. On the other hand, some users reported experiencing negative effects after consuming liberty caps such as stomach aches, painful limbs, and heaviness in arms and limbs. When taken in large amounts, they may cause severe hallucinations and confusion. 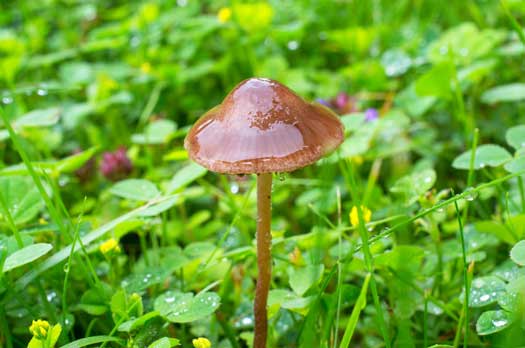 These are mainly found in Western Europe, particularly in the Netherlands. They are also referred to as Stropharia Fimetaria. Psilocybe Fimetaria has a blue base, unlike the Psilocybe Semilanceata.

Conocybe Apala, like Psilocybe Semilanceata, has cone-shaped caps. However, their stems are whitish, and their spores are reddish-brown. Conocybe Apala is quite frail compared to Psilocybe Semilanceata as they break easily. They can be found growing in the middle of the grass. Their caps are non-hygrophanous as they remain pale whether the mushroom is young, mature, or dried up.

Psilocybe Semilanceata can be distinguished macroscopically from psilocybe strictipes because they lack papilla.

However, in the US, they have been decriminalized in Michigan, Colorado, and California. In Sweden, Psilocybe Semilanceata is exclusively prohibited under the Narcotics Drugs Punishment Act.

Psilocybe Semilanceata is an easily identifiable magic mushrooms because of their unique pointed conical caps, partial cob-web-like veils, and reddish purple-brown spores, and slender yellowish – brownish stems. Their use, possession, and sale, however, is prohibited in many countries. Be sure to check with your local laws before picking them.