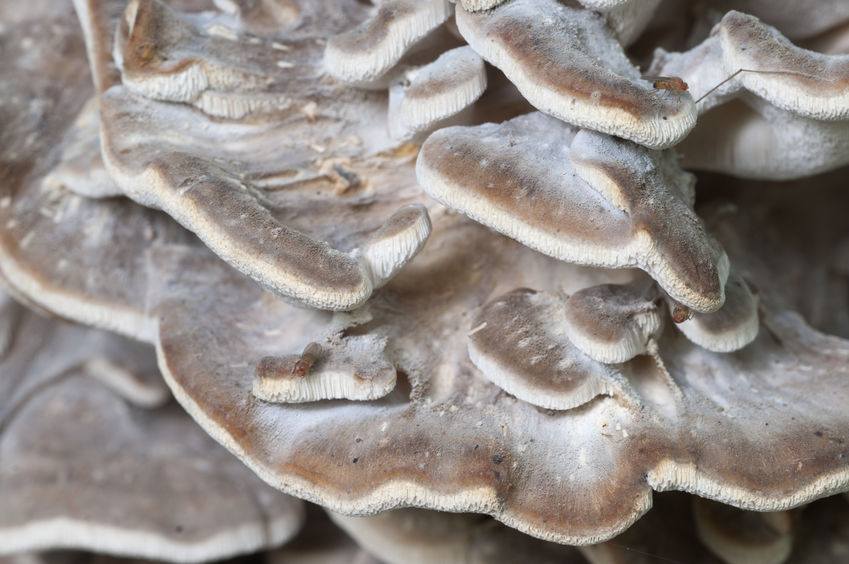 Mushroom hunters love to forage for hen of the woods mushrooms. Also known as maitake, or grifola fondosa, These are very popular mushrooms.  They are highly sought after for their delectable flavor, as well as for the medicinal properties that they offer.

Used in many popular culinary dishes, hen of the woods mushrooms are also known to be a high source of calcium, potassium as well as magnesium, amino acids, vitamin B2 and D2, and niacin.

They have also been shown in studies to help balance blood sugar levels.  It is no wonder that the hen of the woods mushroom is such a popular mushroom to forage.

Where to Find Hen of the Woods Mushrooms

Hen of the woods mushrooms are parasitical mushrooms. They will grow on live trees, as well as on dying and decaying wood, logs, and stumps.  They particularly favor red and white oak trees, generally growing on or near the base of the tree.  These mushrooms can be hard to see sometimes, as they are similar in color to tree bark.

You can sometimes find Hen of the Woods in grove-like environments. They like to grow together and tend to overlap one another.  One mushroom will start growing on one tree, and then its spores will spread to the surrounding trees; making a home for many more years.  They are a great mushroom for foraging partly because you can keep coming back to the same trees to check if they’re ready to harvest; you don’t have to search for them once you’ve found a bunch.

As they move from tree to tree, hen of the woods mushrooms may fruit at different times throughout the season. Checking back frequently during harvest season to a spot where you know they grow – especially after a good rain – will increase your chances for a plentiful harvest.

Hen of the woods mushrooms don’t have many lookalikes, which makes this mushroom safer to forage for than some other ones that have poisonous twins. The umbrella polypore – also known as the grifola umbellata – is the most known doppelganger. Luckily, the umbrella polypore is also edible.

Another mushroom that resembles hen of the woods mushrooms is the bonderzewia mushroom — also known as Berkeley’s polypore, or stump blossom. These look-alike mushrooms are edible as well, although they do not have the same taste.

As always, make sure that you run your mushroom finds past and experienced mushroom forager.

What to Look For

The hen of the woods mushroom is one of the easier mushrooms to identify. Its ridges and formation actually resemble a hen sitting in its nest, which accounts for the name. 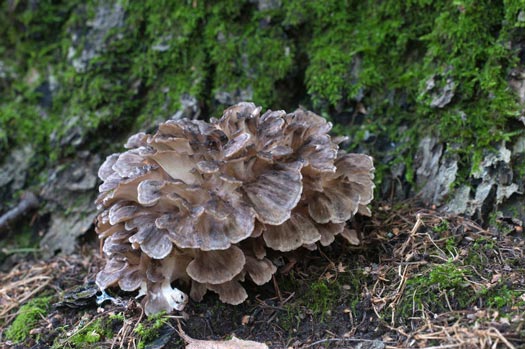 The caps of the hen of the woods mushroom range between 1-3” wide, are fan-shaped and have fleshy spores instead of gills.  These spores help the mushroom regenerate, making more mushrooms to be enjoyed in the future.

The caps will grow in groups, which can become quite large, often 1 to 3 feet across.  Darker brown and black in color when small, hen of the woods mushrooms change color to a lighter tan as they grow in size. When cutting open your hen of the wood mushroom, the inside flesh should be firm and white, with a woody scent.

When to Start Harvesting Hen of the Woods

The best time to forage for hen of the wood mushrooms is from mid to late August, but they can go right into November if the conditions are right.

Even though they can grow upwards of over 30 pounds – and even over 100 pounds in Japan – hen of the woods mushrooms can be tricky to come across, blending in with the forest flora surrounding them. 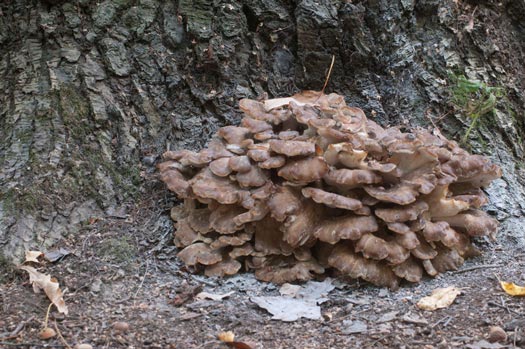 The best time to harvest them is when they are young and small. They are more tender when tiny and have more flavor, getting tougher and bitter as they grow to maturity. Not only do hen of the woods mushrooms become tougher as they grow older, but their smell changes from an initially pleasant woodsy aroma to an awful stench once they reach full maturity.

So pick them when they are young, and you will have clean, tasty mushrooms.

When harvesting a hen of the woods mushroom, use a long knife to cut the mushroom just above the ground – at the main stem.  If you leave some of the stem, the mushroom will grow back and can be harvested again.

How to Cook Them

Before you cook your hen of the woods mushrooms, check them over carefully.  Wipe off any dirt or bugs. Don’t soak your mushrooms, as they will absorb too much water.  It’s best to simply wipe them off with a damp paper towel.

These mushrooms are quite easy to cook, which is another feature that makes them so popular.  They have a light and almost feathery texture, with a bold flavor to compliment the texture. These mushrooms do well sauteed in oil. With such a strong and succulent flavor, you won’t need to add much to your sauteed hen of the woods mushrooms — just a light sprinkle of salt and pepper.

Hen of the woods also makes a great addition to steak or pasta dishes. The stems of these mushrooms are often quite tough, but you can freeze them and then later add them to soup stock.

How to Store Them

Because hen of the woods often grows in large groups, you may find that you’ve harvested more than you can use.  Luckily, these mushrooms are easy to preserve and store long term.

They freeze well — make sure they’re dry, put them in a plastic bag, and pop them in the freezer.  Just thaw your frozen mushrooms when ready, and add them to pasta dishes or to soups.

You can also dry your hen of the woods.  See our article on how to dehydrate mushrooms for more details.

You can even pickle them.  All of these methods are great ways to preserve your harvest and have wild mushrooms through the winter.

For a more detailed overview about cooking mushrooms, see our article The Essential Guide to Cooking Mushrooms.

And see our main recipe page for tons of other mushroom recipe ideas.

So to wrap it up, hof the woods mushrooms are delicious and grow in abundance in the forest.  They are easy to cook and to store, and they are healthy too.  They are a great choice for foraging if you’re just starting to learn about mushrooms.  Just be sure to run your finds past an experienced mushroom hunter and learn how to identify them, and you’ll have a great cheap source of mushrooms! 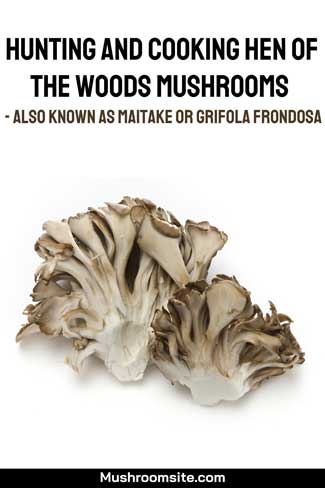