Can You Eat Raw Mushrooms? You May Be Surprised by This Answer 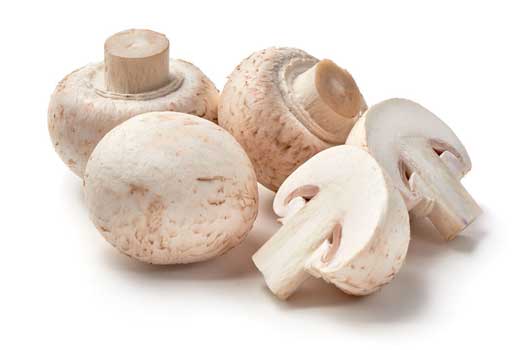 A common question we often get asked is – Can you eat raw mushrooms?

This question is of special interest to those who are trying to keep to a raw food diet.  There are many benefits to a raw food diet, and you can learn a lot by reading The Fully Raw Diet, 21 Days to Better Health.  I actually tried this 21-day plan, and after a few days of sluggishness at the beginning, I felt great!

But while raw food diets have their benefits, not all vegetables are created equal. Some are better and / or healthier when they are cooked.

This is because some vegetables have various protective compounds that are enhanced when cooked as opposed to eating them raw. This is especially true for carotenoids.

While this may be the case for certain vegetables, you might argue that mushrooms don’t fall into that category since, well – they’re not plants to begin with. So, the same rules don’t apply to them. And you would be right. But, the answer is more complicated than that.

This article explores everything you need to know about cooking mushrooms versus eating them raw. 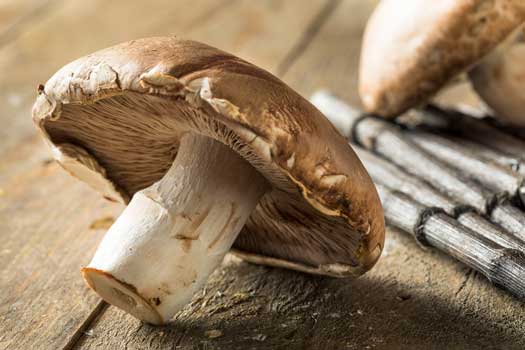 Can You Eat Raw Mushrooms?

The main concern among people who prefer to eat raw mushrooms is that cooking them depletes their vitamin and mineral content. This is true – to some extent.

When you cook mushrooms, they lose water and shrink. So, in that regard, they are less nutrient-dense since a portion of the water-soluble nutrients like vitamins end up getting lost during the cooking process.

But, keep in mind that a single cup of cooked mushrooms can hold double the mushrooms as a cup of raw ones. So, you’re likely to eat more mushrooms in one sitting if they’re cooked, as opposed to eating them raw.

To get an accurate assessment of the nutritional composition of raw versus cooked mushrooms, we’ll be using six large white mushrooms for this comparison.

The protein composition of raw mushrooms is approximately 3.3 grams.  When cooked, they deplete a substantial portion of their nutritional value, leaving behind only 1.5 grams of protein.

The same number of raw mushrooms has 24 calories when raw, which reduces to 20 calories after cooking. The fiber content, on the other hand, actually increases from 1.1 grams in raw form to 1.6 grams when cooked.

The sugar content in raw mushrooms decreases from 2.1 grams to 1.7 grams after cooking. The fat composition remains the same at 0.35 grams in both instances.

The composition of riboflavin, vitamin B6, and folate decreases to less than half when cooked, whereas thiamin reduces by a third. The %DV (daily value) of Niacin, however, doesn’t decrease as much as the other B-vitamins. Its composition in cooked mushrooms accounts for 23% DV.

Cooking generates mixed results in mushroom mineral content. On the one hand, cooking them somewhat depletes their sodium, potassium, phosphorus, and magnesium levels, although the differences aren’t significant.

On the other hand, cooking has much less effect on the amount of iron, zinc, and calcium present.  Those amounts stay just about the same when cooked as when raw.

Some varieties of edible fungi, including the common white button mushrooms, contain traces of certain carcinogenic compounds in their raw form.

Shiitake mushrooms, for instance, have trace amounts of naturally-occurring formaldehyde, which is toxic to humans. Portobello mushrooms have hydrazine – a highly toxic and potentially carcinogenic compound.

One common naturally-occurring hydrazine in mushrooms is agaritine – a type of phenylhydrazine, that is present in both cultivated and wild Agaricus mushrooms. Portobello, white button, and crimini mushrooms all belong to this category.

Studies have found that these compounds have the potential to damage DNA by causing chromosomal breakage and mutations, which can, in turn, promote the onset of cancer.

The good news, however, is that these carcinogenic toxins are broken down by heat, which is why it is always advisable to cook these mushrooms before eating them.

Research also shows that drying or refrigerating mushrooms also breaks down agaritine. So, the pre-packaged raw or dried mushrooms you encounter at your local grocery store or salad bar may only have a fraction of the toxin, compared to what you would find in freshly picked mushrooms.

Be that as it may, if the results of a 2009 study published in the International Journal of Cancer are anything to go by, making mushrooms part of your daily diet reduces the risk of getting certain types of cancers by a whopping 60 percent.

It goes to show that you’re more likely to reap the rich antioxidant and cancer-fighting benefits of mushrooms if you cook them first before you eat them.

Other Types of Mushrooms

There are several other types of mushrooms which are fine to eat when cooked, but that can give you an upset stomach if you eat them raw.  Morels, in particular, fall into this category.

So, what’s the bottom line? Can you eat raw mushrooms? Well, you can do anything you want to do. It’s a free country. But, based on the facts detailed in this guide, there are some potential drawbacks.

Some raw mushroom slices in your salad are probably fine, but data shows that it is best to eat the majority of your mushrooms cooked.

Some of the nutritional value of certain nutrients in mushrooms decreases when they are cooked, but there are others whose concentration increases. Not to mention that cooking gets rid of the harmful and potentially-carcinogenic toxins present in certain mushroom varieties.

You’re also more likely to eat more mushrooms in one sitting if they’re cooked, compared to eating them raw. So, you still get more nutrients either way. It’s a win-win.

For more information on how to use mushrooms in your diet, check out our ultimate mushroom calories guide. 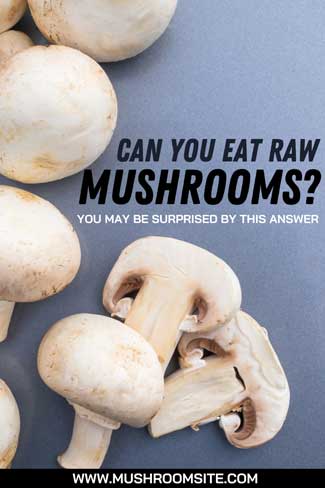