The Essential Guide to Cooking Mushrooms 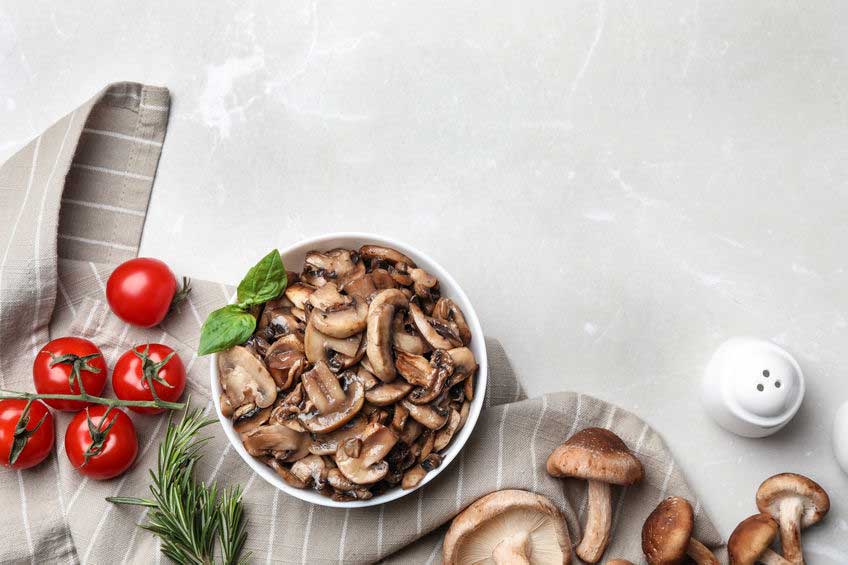 There’s also the issue of nutritional benefits. Cooking mushrooms like shiitake, button, and oyster, for instance, has been known to not only increase their nutrient value and antioxidant activity, but it also helps them retain most of their vitamins and nutrients. It activates and transforms these nutrients into a form that is accessible to the body.

From a flavor standpoint, while some swear by the taste of mushrooms when eaten raw, you cannot compare it to the delicious umami flavor that comes from cooking them.

If you belong to this category of foodies who don’t quite enjoy the taste of cooked mushrooms, is it at all possible that you’re not doing it correctly? If that’s the case, here’s everything you need to know about cooking mushrooms.

Cooking Mushrooms – Use the Right Method for the Right Variety

Mushrooms are arguably one of the most versatile ingredients out there. They are the perfect complement to nearly every meal you can think of.

Nonetheless, different varieties have different flavor profiles and textures that make them blend well with certain dishes when cooked in a specific way. Below is a compilation of the most common types of mushrooms, as well as the best way to cook them.

Also known as champignons, these are the most common type of mushroom variety you’ll come across. They are generally small and firm with caps that close tightly around the stem.

Although their flavor is somewhat mild when compared to other varieties, cooking them intensifies it. It activates the glutamate in their flesh, which is what gives them their characteristic umami taste. You can serve them whole or sliced, and they pair well with stir-fries, all kinds of pasta, pizzas, risottos, and salads. You’ll likely enjoy them more if you barbecue them.

Older buttons, whose cap has opened and curved away from the stem, are darker than their younger counterparts, but just as firm in texture. They are also a lot more flavorful and taste even better when you slice them up and cook them.

Any cooking method suits them just fine. So you can sauté them, grill them, or even incorporate them in sauces, soups, and casseroles.

If you’re looking for a no-fail recipe that’s guaranteed to be an instant hit in your home, you need to try pan-seared or grilled garlic butter mushrooms. It’s easy to make, serves four, and takes no more than 15 minutes from start to finish.

Heat the olive oil and butter in a cast-iron skillet over medium-high heat until the butter becomes foamy. Then add half of the minced garlic and cook until it’s fragrant. Throw in the mushrooms, stir them to make sure that the butter and garlic coat their surface, and spread them out evenly on the pan in a single layer.

At this point, you have the option to sauté them over the stovetop, or thread them on the pre-soaked wooden skewers, and put them on a preheated charcoal or gas grill to barbecue them. Either way, the results are spectacular.

Season lightly with salt and pepper, garnish with chopped herbs, and serve with steak, pork chops, chicken, salmon, or ribs. You could even serve them as an appetizer.

Crimini (plural) look very similar to the button variety in terms of their shape and size. Their differences become apparent in their texture, flavor, and color. They are firmer, have a characteristic earthy taste, and are generally much darker. 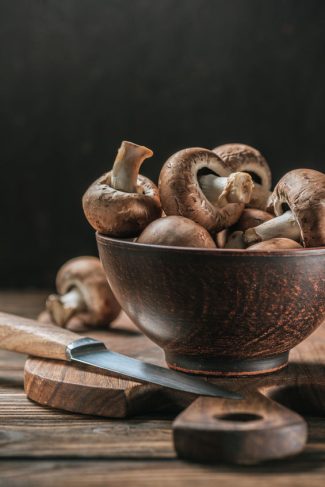 Cremini tends to have less moisture content in them. So, they retain their shape quite well even when cooked. They pair well with slow-cooked dishes, pasta, sauces, as well as in pies.

For a foolproof way to impress your guests at a dinner party, there’s no better way to do it than through this simple yet delicious cremini mushroom pasta. It takes about 30 minutes to prep and cook and serves six.

Boil the pasta according to the directions on the packaging. Proceed to heat the olive oil in a saucepan over medium-high heat, and then add the shallots, garlic, and crimini. Cook them until all the liquid evaporates, and the mushrooms start to caramelize and become crispy.

Turn the heat to low, add the flour, and stir to coat all the mushrooms before adding in the milk. You can use unsweetened milk as a dairy-free option. Bring to a boil and keep stirring until the sauce thickens.

Add the peas and cook for about a minute before taking the skillet off the heat. Fold in the cooked pasta and toss it to coat with the sauce. Garnish with parsley and serve while hot.

This variety of mushroom is best identified by its umbrella-shaped cap that curls along the edge ever so delicately. Shiitakes have a mild woodsy aroma, which is even more intense when they’re in their dried form.

Their umami flavor comes from the enzymes found in their flesh. So, it is important not to rush the cooking process to allow them to release the maximum amount of flavor possible.

The best way to cook shiitakes is to fry them, especially if you’re using the fresh kind. Dried shiitakes will work just as well once you reconstitute them.

Here’s an easy-to-make teriyaki fried shiitake recipe that you’ll love. It’s the perfect topping for burgers and steaks, although they are equally as exquisite when served as a side dish to the main entrée. The prep and cooking time takes a total of 30 minutes and serves six.

To make this tasty Teriyaki fried shiitake, melt the butter in a large skillet over medium-high heat. Add the garlic and fry for a minute before adding the mushrooms. Stir and fry for three minutes until they brown.

Mix in the Teriyaki sauce, season with salt and pepper, and cook for one minute. Remove the skillet from the heat, garnish with parsley, and serve while it’s hot.

Commonly known as shimeji, these white fan-shaped mushrooms can be found in the wild, although the store-bought and restaurant-menu varieties are likely to have been cultivated. Their delicate flavor and aroma make them a staple in many Chinese and Japanese soups and stir-fries. 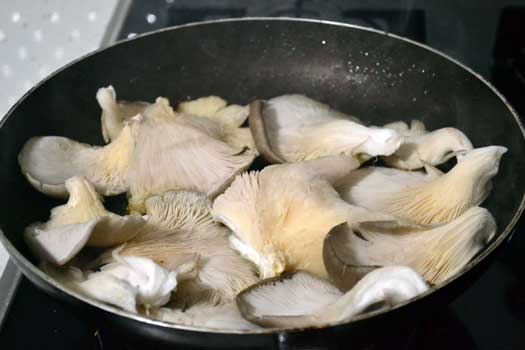 Nonetheless, they also taste great when pan-fried, sautéed, and roasted, or when combined with rice, seafood, pasta, and meats.

One of the best things about cooking with oyster mushrooms is the fact that they are available all year round. Here’s a great stir-fry recipe you can try out this summer. It takes 15 minutes to prep and cook and is enough for two servings.

Heat oil in a nonstick wok over medium-high heat and add the mushrooms. Drizzle the dark soy and oyster sauce over the mushrooms and mix well. Leave it to cook for 3 minutes, occasionally stirring to prevent the mushrooms from sticking to the wok.

Add salt, pepper, and green onions before giving it a final toss and taking it off the heat. Garnish with thyme and serve with steamed rice, alongside other stir-fried vegetables.

This variety of mushrooms draws its origins in Japan and is identified by its tiny cap and long thread-like stem. Also referred to as golden needles, Enoki has a characteristic fruity flavor and crispy texture, making them ideal for use in salads, sandwich fillings, or wraps.

Because of how thin they are, you need to cook them quickly on a hot pan for them to retain their crunchy texture. You can add them to omelets, soups, sauces, and risottos.

Garlic enoki mushrooms with scallion sauce is an absolute must-have. The simplicity of this recipe makes it perfect for serving as a side dish to an entrée.  You can also serve it as an appetizer before the main course.

You could also have it as a light lunch or a healthy snack when you’re feeling peckish. The total prep and cook time is 20 minutes and is enough for four servings.

Because of how thin and delicate they are, you need to be gentle when handling these fungi. Start by boiling some water in a wok and blanch the enoki in two separate batches for roughly a minute each. Transfer them to a colander and let them drain before placing them on a serving platter.

Next, heat oil in a medium-sized saucepan over medium-high heat and add the garlic. Cook it for a few seconds before adding the scallions, sugar, and soy sauce. Stir and bring the mixture to a boil for 1 minute, and then turn off the heat.

Pour the sauce over the mushrooms, garnish with parsley, and serve. If you don’t have enoki mushrooms, you can use beech mushrooms instead to get the same delicious result.

Because of how difficult it is to cultivate these wild mushrooms, chanterelle hunters have to forage for them in the woods. They are firm, fleshy, and golden-hued, with a cap that has a slight depression at its center. 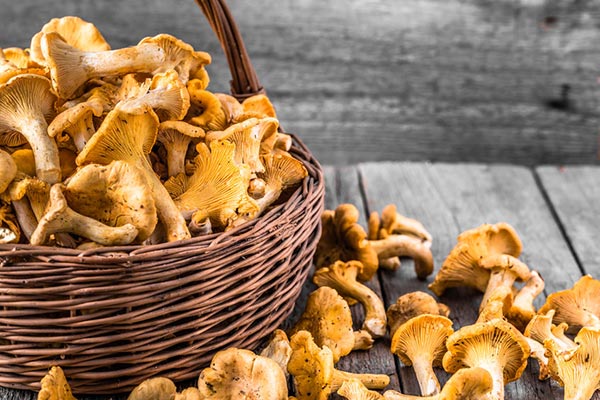 They have a distinct apricot-like flavor and aroma that pairs well with dishes that call for cheese, poultry, eggs, and anything that calls for cream and butter in its ingredients.

Because of the unusually high amount of moisture they contain, traditional mushroom cooking techniques like sautéing them after coating in dry flour, or batter-frying them, don’t work well with chanterelles.

The best way to cook them would be to pan-sear them and then spoon them over a nice succulent steak or cheese omelet.

Here’s an easy way to make pan-seared chanterelle mushrooms. This recipe makes four servings with a total prep and cooking time of 20 minutes.

Heat a well-seasoned cast-iron skillet over medium-high heat and add the mushrooms. Don’t worry if they stick at first. They’ll start to release moisture soon after, and you’ll be able to use a spatula to move them around the pan.

Once all the moisture has evaporated, add the butter and let them cook in it for 2 minutes before adding the garlic. Sauté the mushrooms until they turn golden and the edges crisp.

Season lightly with salt and pepper, and spoon them over your favorite dish. You can use this same recipe to make black trumpet mushrooms since they, more or less, share the same properties.

Experiment to Find What Works for You

Different varieties call for different ways of cooking mushrooms. The specific technique you employ largely rests on their flavor profiles and physical characteristics. The cooking possibilities are virtually endless. Experiment with different recipes to find what works for your palate.

Either way, mushrooms are great to have on their own and are the perfect complement to any meal. Use tips you’ve picked up in this guide, to cook them properly based on the specific variety you have with you.

In the meantime, check out our blog for a no-fail method for cooking mushrooms on the stovetop. You’ll love it as much as we do! 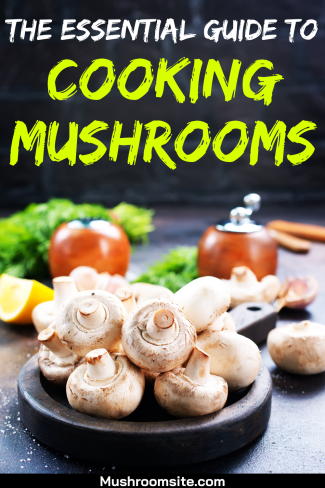 Have you heard of pheasant back mushrooms? They are one of the most underappreciated mushrooms, even…

Maitake (Hen of the Woods) Recipes – 5 Ways to Cook Them

If you’re craving a strong mushroom flavor, adding maitake mushrooms to your recipe can be your…

Porcini mushrooms are wild, brown-capped mushrooms that have a deep, woodsy, earthy flavor and give a…