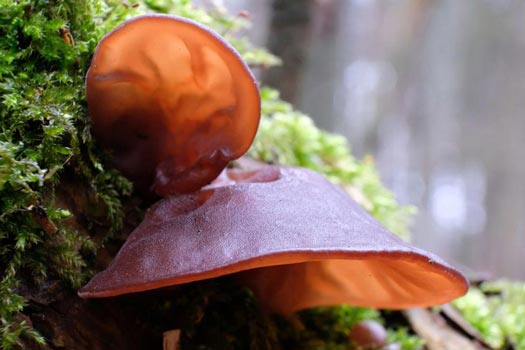 If you’re a fan of Asian cuisine, then you’ve likely come across hot and sour soup. It is typically a meat-based broth that contains ingredients such as tofu, day lily buds, bamboo shoots, and dark fleshy strips of wood ear mushroom. One sip of it, and you’ll be hooked!

Wood ear mushrooms are one of those ingredients with the uncanny ability to add pizzazz to any meal beyond just using it as an ingredient in soups.

We will also discuss wood ear mushroom benefits to your health, as they are extensively used in Asian medicine.

What Are Wood Ear Mushrooms?

Healers have been using wood ear mushrooms for hundreds of years. According to several sources, farmers cultivated them in China as early as 600 AD.

They were initially native to Asia and some islands in the Pacific Ocean. Today, however, they are found in humid temperate regions all over the world and typically grow in the wild on old decaying wood. 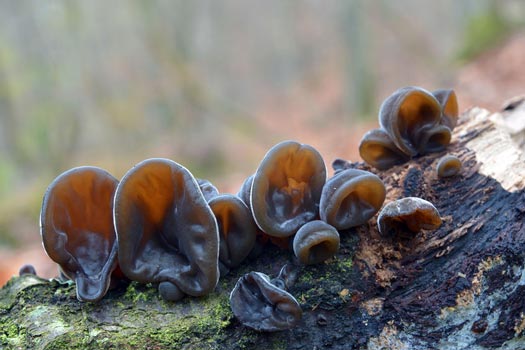 They are mostly cultivated in Asia since they are a staple ingredient in several local cuisines. Nonetheless, you will find them in several fresh produce markets all over the world – mostly in dried form. 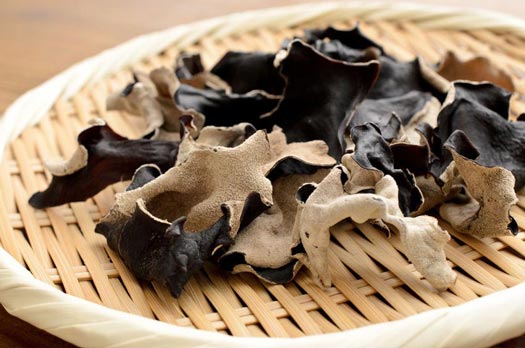 They measure around three to eight centimeters in diameter and appear wavy and curvy with many folds resembling floppy ears. Unlike other varieties of edible fungus, wood ear mushrooms don’t have a stem or cap.  They also have a gelatinous slippery texture to them.

As they age, the fungi darken in color and can even end up becoming black. But more often than not, they adapt the color of the tree host they grow on.

Wood ear mushrooms also have a woody and earthy fragrance with a mild, musty flavor when cooked. When added to other foods, they take on the taste of whatever ingredients they’re cooked in.  So cooks utilize them mostly for their crisp, snappy texture and their health benefits. They are a great addition to soups, salad, and stir-fries.

Other popular names that the fungus goes by include black fungus and jelly ear. Its scientific name is Auricularia Auricula-Judae, based on an old myth that Judas Iscariot hanged himself on an old tree that had Wood ear mushrooms growing on it.

This fungus was once used exclusively in traditional forms of medicine. Since then, researchers have found more evidence to support its incredible benefits. Some varieties of wood ear mushrooms, for instance, have shown impressive health results ranging from decreasing the growth rate of cancer cells to lowering blood cholesterol levels. 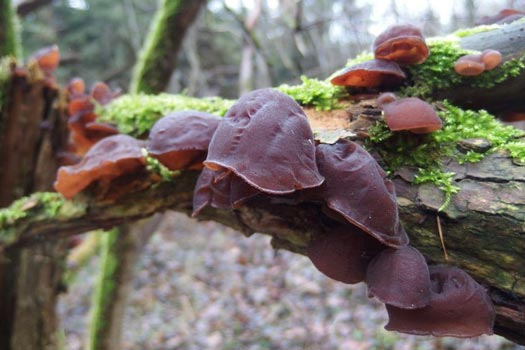 Wood ear is rich in antioxidants and several vital nutrients that make it a great addition to your daily diet. Some of the top benefits and uses of wood ear mushrooms include:

Not only is wood ear high in antioxidants – which are the nemesis of cancer cells, one study found that it is highly effective in killing off tumor cells in the stomach, bones, and lungs. While this was a vitro study, it is already showing promising results and is expected to work just as well once the human-trials phase begins.

Are Great Sources of Copper

Wood ear mushrooms pack a punch when it comes to their nutritional value. They are an abundant source of copper – a powerful micronutrient that plays an essential role in iron metabolism, lung function, and heart health.

Have High Amounts of Antioxidants

Antioxidants are compounds that help protect the cells in the body against oxidative damage. They do this by fighting the formation of free radicals, which can also cause cancer in the long run.

Antioxidants also promote good heart health and prevent the onset of chronic conditions like rheumatoid arthritis. Wood ear mushrooms are a great source of both antioxidants and polyphenols. Polyphenols play a key role in warding off free radicals.

Impede the Growth of Bacteria

In addition to their nutritive value and antioxidant properties, wood ear mushrooms also have antimicrobial properties, which are great for fighting off certain strains of disease-causing bacteria.

One study, in particular, found that they were highly effective in blocking the growth of Staphylococcus aureus and Escherichia coli – two strains of bacteria that are known to cause infection in humans.

A 2007 study used an animal model to investigate the hypolipidemic effects (decrease in the level of blood lipids) of wood ear mushroom extract. The results revealed massive reductions in the levels of bad LDL cholesterol, total cholesterol, and triglycerides.

This means that regular consumption of the fungi can go a long way in keeping errant blood cholesterol levels in check, which in turn helps protect against heart disease.

Wood ear mushrooms are jam-packed with loads of vitamins, minerals, and other essential nutrients. These play a central role in the health and wellbeing of individuals who consume them frequently.

Each 99-gram serving of raw wood ears (which is about a cup full) contains generous amounts of selenium, pantothenic acid, riboflavin, and copper. They have a measly 25 calories – which is great if you’re trying to shave off a few extra pounds. Their mineral composition includes:

The best way to reap the remarkable benefits of wood ear mushrooms is by incorporating them into your daily diet. There are several easy and delicious wood ear mushroom recipes you can make, ranging from salads and stir-fries to soup and ramen.

You can even use them in dumpling fillings. Whichever way you prefer to consume them, one thing is for sure: They are an excellent complement to your meals and your long-term health.

Be sure to clean them thoroughly before consuming them and avoid them altogether if you are allergic to mushrooms.

Wood ear mushrooms may also interact with blood thinner medication like Coumadin or Warfarin, so consult your physician first before using them in your diet.

While fresh wood ear can be difficult to find, you can buy dried wood ear at your local Asian market or on Amazon.  We like Vigorous Mountain dried wood ear mushrooms.

We’ve covered the many amazing health benefits of the wood ear mushroom.  Try adding some of this fantastic mushroom to your diet today!

Did you know that Shiitake mushrooms are also considered to have many health benefits?  Check out our article on Shiitake Mushroom Nutrition Facts and Health Benefits to learn more!

And if you’re interested in cooking with wood ear mushrooms or any other type of mushroom, check out our Essential Guide to Cooking Mushrooms. 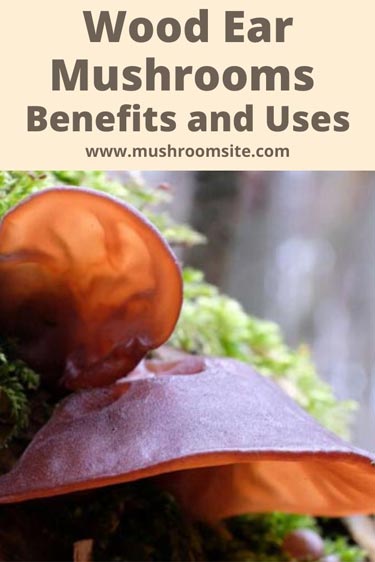