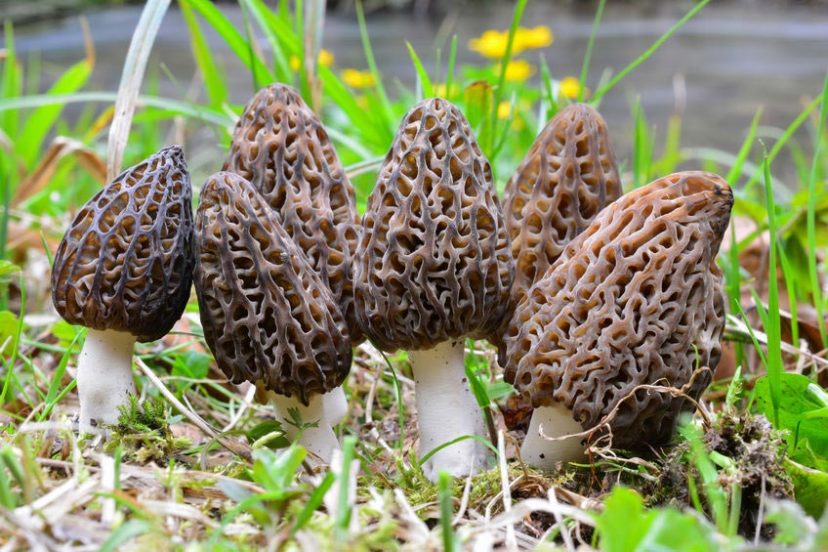 Spring is coming, and so are morels.  These delicious, earthy tasting mushrooms will begin to appear in March in Southern climes, and in April if you are further North. Read on to learn how to find Morel Mushrooms in the wild.

Because of their distinctive look, widespread distribution, and—most importantly—their delicious flavor, morels rank among the most sought-after mushrooms in North America, Europe, and Asia.

That said, it takes plenty of patience and a sharp eye to find them.  Here’s an overview of how to find morel mushrooms.

Note: If you have never foraged for morels before, we recommend that you hunt with an experienced mushroom forager for your first time.  Most communities have groups of wild mushroom enthusiasts.  There is a group called the North American Mycological Association (NAMA), which has chapters in every state as well as in most Canadian provinces.  Most of these chapters offer mushroom foraging classes.  You can learn more at www.namyco.org.

Several species of Morels grow across North America, including the Yellow Morel, the Black Morel, and the White Morel.

Morels typically are cone-shaped mushrooms.  They have honeycomb caps and thick stalks.  Because of their color and texture, they can be hard to see. But once you find one, they are quite easy to identify.

There are a few locations, like parts of California, where you can find Morels throughout the year.  But in most of the country, they are primarily spring and early summer mushrooms.

Morels will start to grow once topsoil temperatures reach between 50 and 60 degrees Fahrenheit, which generally occurs once nighttime temperatures stay above about 40 or 45 degrees.

Morels also need adequate moisture.  An unusually dry spring doesn’t bode well for a good morel crop. The best scenario is a  rainy stretch in spring with warm-enough soil temperatures, and then some sunshine: prime time to hit the woods!

Morel season in North America usually starts in March for Southerners and in April for people further north.  You can find into June and even July during a cool summer.

In many regions, Morel hunters take signals from nature to clue them into Morel season, especially plants that emerge or leaf out under the same conditions that stimulate morel fruiting. In the central and eastern U.S., for example, may-apple blooming tends to coincide with morel pop-up. Flowering calypso orchids are a similar harbinger In the Mountain West.

That said, there are some look-alikes that foragers need to be aware of, as they can provoke bad and even fatal reactions.  For this reason, we recommend that you forage with an experienced hunter the first time you go looking for morels.

The main look-alikes to be concerned about when trying to find Morel mushrooms are False Morels.

There are a few tell-tale signs for identifying False Morels.  First, they have ridges and look wavy, with misshapen bulges giving the mushroom a unsymmetrical look.

Whereas the heads of regular morels are pitted and tend to be quite symmetrical.

Also, False morels will be solid. Real Morels will always be hollow inside, as in the picture below.

So remember, there are three things to confirm before you eat your morel:

1: Make sure that the cap has a pitted appearance

2: Make sure that the mushroom is hollow

3: Make sure that the mushroom stem connects to the bottom of the cap walls.

Lastly, be aware that even real morels can cause stomach upset if you eat them raw. Always cook your morels before eating them.

Morels grow in a wide variety of places.  There are a few places that they seem to prefer, though.  Open forests, woodlands, as well as old orchards, are excellent places to hunt for them.  They tend to like hardwood trees, like oaks and elms, so look in areas where you see these trees.

Early in the season, you’ll usually have the best luck finding morels on south-facing slopes, as they get more sunshine and the soil warms up more quickly.  You may also find morels on river and stream banks.  They also grow in forest clearings, where the ground thaws out and warms up early.

Later in the season, move to north-facing slopes and denser woods to find the late bloomers.  In a hilly or mountainous area, you can follow morels by going higher. Higher elevations may see morels popping up well into summer.

Like a lot of mushrooms, morels can grow in all sorts of different settings—including such surprising ones as suburban backyards and gardens. 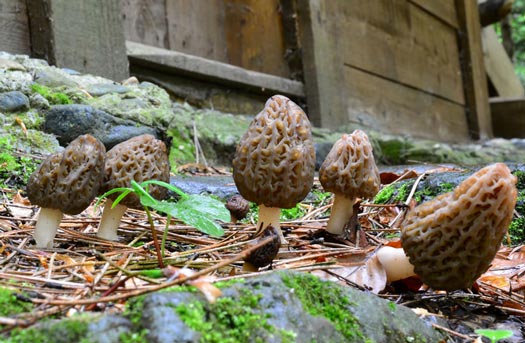 Yellow morels tend to be most associated with hardwood trees.  They will grow, for example, in deciduous woods in eastern North America, and under cottonwoods, alders, and other riparian hardwoods along rivers and streams in the West. Black morels are more often found under conifers such as firs and larches, though they’ll also grow in aspen forests.

Black morels as well as certain other morel species fruit prolifically in the wake of wildfires, which makes recently burned areas some of the most coveted morel-hunting grounds out there. It’s often possible to obtain maps of areas lately burned in either wildfires or prescribed fires by state or federal agencies in the U.S., which can help direct your mushrooming.

Other disturbances to the forest, such as fires and logging, can also promote temporary smorgasbords of morels.

The drab hues of morels blend in really well with groundcover. To effectively find wild morel mushrooms, you need to burn a “search image” of the mushroom into your minds-eye. That’s true for beginners and is also true for veteran foragers at the start of a new spring hunting season.

If you chance upon a morel, spend a minute or two studying it before you pick it.  View from a distance, up close, in between, so you get a deep sense of its appearance in the field. Often enough, you’ll start seeing morels all over once you’ve locked into this search image. It can even pay to retrace ground you scouted over unsuccessfully after you find a morel or two to see whether your new, keener “mushroom-vision” doesn’t turn up a crop you missed.

Once you’ve found likely habitat—say, a mixed hardwood forest in the Midwest, an oak woodland in California, or a recently burned pinewood in the Rockies—scout around for a little while. If you don’t see a morel after a half-hour or 45 minutes, consider shifting to another zone within the general area.

If you do luck out and find a morel, it’s time to slow down. Try to search more meticulously in a tight radius around that mushroom. There’s a good chance there will be others—maybe many others!

A walking stick or trekking pole is a handy tool to bring along while Morel hunting. Besides helping you keep your balance in rough terrain, you can use it to sift gently through the underbrush.

You’ll often have better luck finding morels farther away from roads and trails. However, sometimes it pays to practice reverse psychology.  Occasionally, you will find morels right off of a path because other foragers assume they have to go “deep” and don’t search these easily accessible swaths.

The message here is to keep your eyes peeled and every once in a while do a quick survey through a patch of woods or brush otherwise less promising-looking for morels: There may be a secret bumper crop everybody else has ignored.

To successfully find wild morel mushrooms, you’ll usually have to go off-trail. Make sure you have a good topographic map and know how to use a compass (not just a GPS unit). Always bring a first-aid kit, insulating layers, extra food and water, and other basic outdoor essentials when you go foraging.

Morel season in North America tends to overlap with prime tick season. Unfortunately, morel and tick habitat also tends to overlap, so be sure to check yourself thoroughly during and after your mushroom hunts.

Be aware of what type of land on which you are hunting for Morels.  Foraging is commonly allowed in state and national forests, though you should always confirm with the responsible managing agency and abide by all mushroom-foraging rules. You may or may not need a permit.

Always get permission before hunting morels on private lands. Many private landowners are receptive to allowing people to gather mushrooms on their acreage. But they may not take kindly to those who trespass and do so without asking first!

Finally, be aware that in some places, spring turkey hunting may be going on when you’re looking for morels, so take proper hunting-season precautions (such as wearing blaze-orange).

How to Find Morel Mushrooms — Conclusion

Morel hunting is a fun way to spend an afternoon and, once you get good at it, you can find many pounds of this delicious mushroom.  Be careful on your first few outings, and in time you will become a master morel hunter! 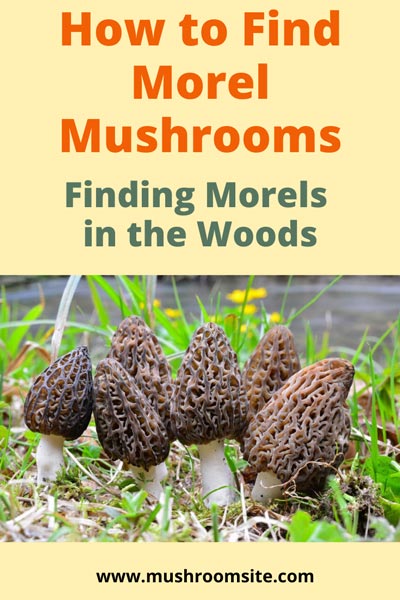 The Most Popular Mushroom Types – The Ultimate Guide

Mushrooms come in all shades, from the beautiful and edible types to the odd-looking and poisonous…

First and foremost, foraging edible wild mushrooms is a venture that requires extreme caution. One false…

How to Identify Mushrooms — Some Basic Concepts

There’s a vast array of mushrooms in the wild. Some are dark and mysterious, some are…