Complete Guide to the Lobster Mushroom 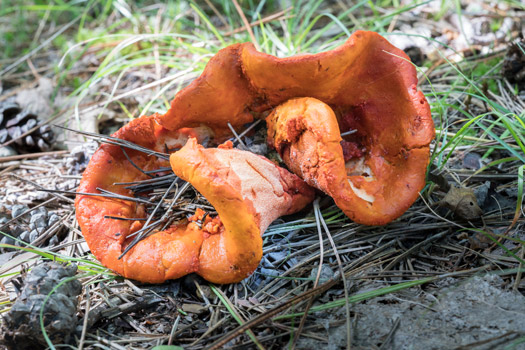 If chicken of the woods mushrooms taste like chicken, then it only makes sense that a lobster mushroom would taste like lobster, right?

Well, not exactly. Technically speaking, a lobster mushroom isn’t even a “mushroom” per se.

It is more of a parasitic mold that attacks mushrooms, engulfing them and completely altering the way they look. As a result, the altered mushrooms take on a reddish appearance, which makes them resemble cooked lobster – hence the name. So, it has nothing to do with the actual flavor of this wild mushroom.

These two mushroom types have a bland flavor. But the parasitic mold not only makes them taste remarkably better, but also improves the overall texture of Russula, which is somewhat crumbly in its natural form.

So, what’s so special about lobster mushrooms, anyway? This guide explores everything you need to know about them. 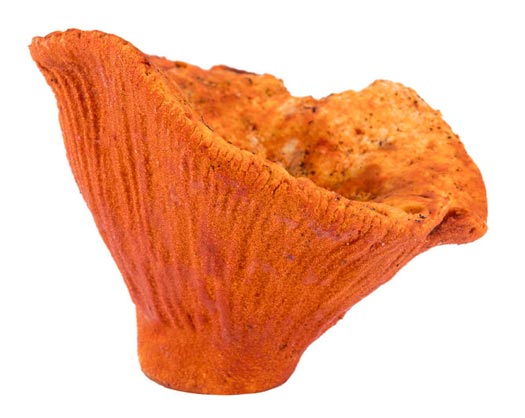 One warning, some species of the Russula mushrooms that the Lobster Mushroom mold grows on, can cause stomach upset when not cooked thoroughly.  For this reason, only the species Russula Brevipes is collected commercially in the US.  Be careful collecting these mushrooms and, if it is your first time, be sure to run your finds by an experienced mushroom forager.  Visit the North American Mycological Association’s (NAMA) website to find a local mushroom club near you.

Where to Find a Lobster Mushroom

Lobster mushrooms are arguably one of the most highly sought-after culinary ingredients in the world of gourmet cooking. Perhaps it’s because of their bizarre appearance or the fact that you won’t find them growing just anywhere. They are also a hit among home cooks who want to add a little pizzazz to their meals.

Lobster mushrooms complement seafood dishes perfectly and are a great meat substitute in vegetarian recipes. They readily absorb the flavors of the other ingredients you cook them in.

The milk cap and russula mushrooms that the lobster mushroom mold thrives on grow mostly in temperate forests, in areas that have hemlock trees. These types of forests exist in the northern regions of the United States and southern Canada.  They are also common in northern Europe and western Russia.  You’ll find them sprouting between early summer and mid-fall.

If forest foraging isn’t your cup of tea, then you can try checking if your local specialty grocery store or farmer’s market has them in stock. 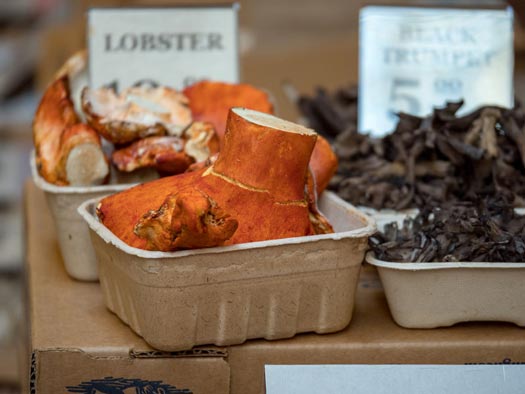 West Coast Wild Foods Dried Lobster Mushrooms are by far the best dried lobster mushrooms that we have sampled. Wild-picked in the Pacific Northwest, they come the closest to the real lobster mushroom that I have found.  They are quite expensive though.

How to Harvest Lobster Mushrooms

If you are lucky enough to find lobster mushrooms in the forest, here are a few tips to help you harvest them the right way.

First, a mature lobster mushroom should feel slightly heavy. It should weigh just about the same as a paperweight. The keyword here is “mature.” There is a big difference between a “mature” mushroom and an “old” one.

Older lobster mushrooms take on a visibly purple color, have a characteristic “fishy” odor, and feel light.  Don’t consume these older ones, as they can cause stomach upset.

Second, when foraging for these polypores, you want to cut them off at their stem with a knife, rather than pulling them straight out of the ground. The rule of thumb is to leave a portion of it exactly as you found it to allow for the spores to sprout for future foraging.

Put them gently into a bag and get them home quickly.

How to Clean and Store Lobster Mushrooms

Ideally, your lobster mushrooms should be eaten within three days of harvesting if you want to enjoy the intensity of their savory flavor. But, if you intend to store them for longer, here’s how to do it.

First, you’ll need to prep them. This involves cleaning them since lobster mushrooms tend to trap a lot of dirt in their concave-shaped caps and cracks.

You need to be gentle when cleaning these mushrooms to avoid removing their characteristic vibrant red color.  The best way to clean them is to gently brush off any visible dirt with a dry brush or paper towel.  You may need to break the mushrooms apart to get at particularly dirty areas.

It’s best not to soak these or any mushrooms unless you absolutely have to.  If you have especially dirty ones, you can probably get away with breaking them, rinsing them quickly with icy cold water, and then wiping them off with a paper towel.

Once the mushrooms are clean, place them in an airtight container or ziplock bag and freeze them. To avoid ruining them, you should complete this entire process in the shortest time possible. But do make sure that any mushrooms that you rinsed off are dry before freezing.

Alternatively, you can also dehydrate these mushrooms. See my article entitled How to Dehydrate Mushrooms, a Complete Guide, to learn more about dehydrating mushrooms.

One more warning — any leftover lobster mushroom dish that you cook should be eaten within a day, even if you put it in the fridge. While I have never had any issues with lobster mushrooms, there are rumors that people have gotten sick from cooked mushrooms that have sat around for a couple of days. Better safe than sorry.

Here are some of the health benefits of lobster mushrooms.

Don’t Judge a Mushroom by Its Cover

If you come across a lobster mushroom, you might be put off by the ugly exterior of this wild mushroom. But, make no mistake about it. This strange-looking red parasitic fungus with its hard and roughly flecked crust and crisp white interior is one of the best-tasting mushrooms you’ll ever come across.

If you’ve never tasted them before, make it a point to try some. You’re missing out on a unique culinary experience. Your taste buds and health will thank you.

Did you enjoy reading this piece? Then you’ll like our Complete Guide to the Matsutake Mushroom. Find out what all the hype around them is. 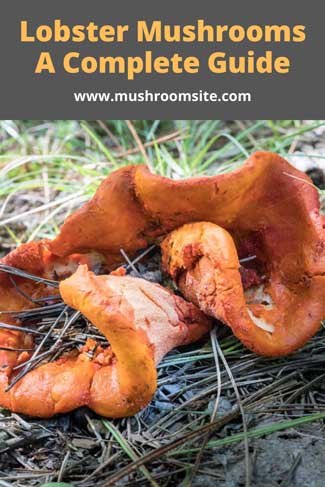