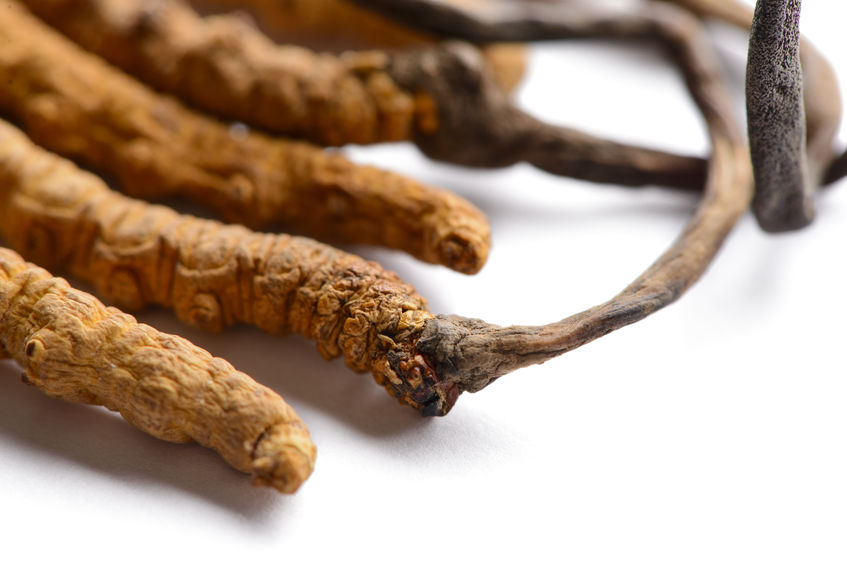 Cordyceps mushrooms (Cordyceps Sinensis) are a parasitic type of fungus native to the Himalayas and the Tibetan Plateau.  They are reputed to have many health benefits.  Chinese and Tibetan healers have used Cordyceps for centuries in Tibetan and Chinese medicine.  This guide to Cordyceps Mushrooms will discuss how Cordyceps grows, where to get it, how to use it, and its health benefits.  Read on to learn all about Cordyceps.

Where Does Cordyceps Grow?

If you enjoy horror films, you will love Cordyceps Mushrooms!

Instead of growing on trees or in the ground, These parasitic mushrooms take up residence on insects, mainly in a certain type of caterpiller that lives in the Himalaya mountains. Once the spores have settled into their host, they replace their host’s flesh with their own mushroom tissue.  After some time has passed, they sprout a long, thin, stem-like mushroom out of the head of the now-dead caterpiller. 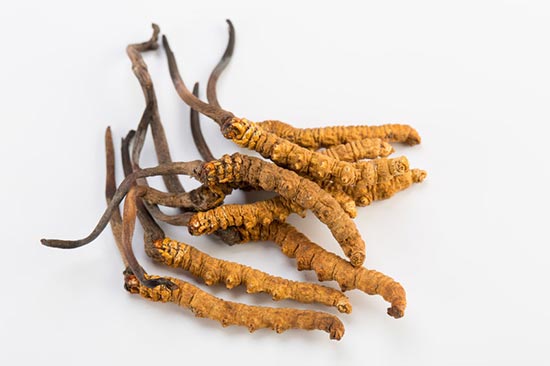 Different species of Cordyceps Mushrooms grow in many countries worldwide, but the species that has the most reputed health benefits, Cordyceps Sinensis, grows only in the Himalayan regions of Tibet, Nepal, and Bhutan.  It is rare and extremely expensive.

These caterpillars live in alpine fields high in the mountains, and as they die they sink into the moss and grass.  At certain times of the year, whole fields are filled with the little orange stem-like mushrooms, sticking 1-3 inches out of the ground. 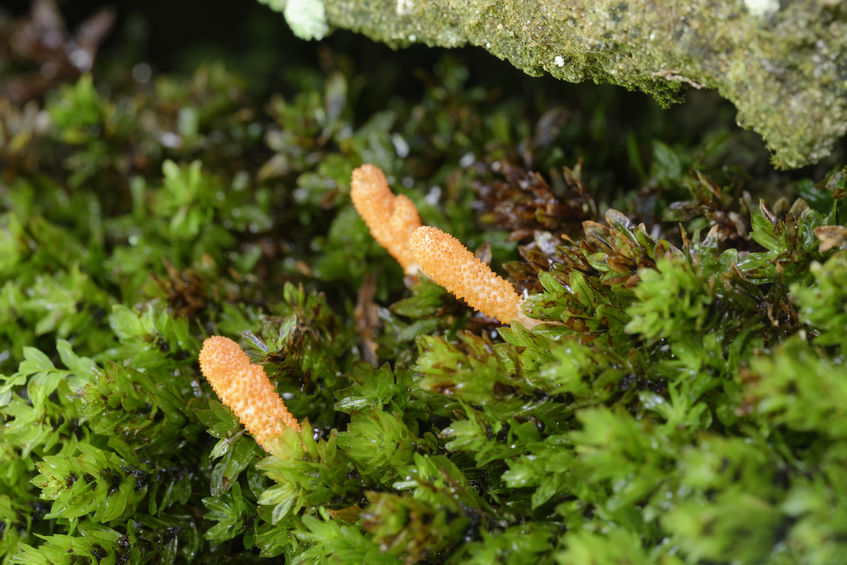 In Chinese medicine, Cordyceps is second in importance only to Reishi, as far as mushrooms with health benefits go.  For this reason, Cordyceps harvesting has become central to the economy of the Himalaya region.  Local people scour the fields for Cordyceps.  They then sell their harvest in markets and at stands by the side of the road. 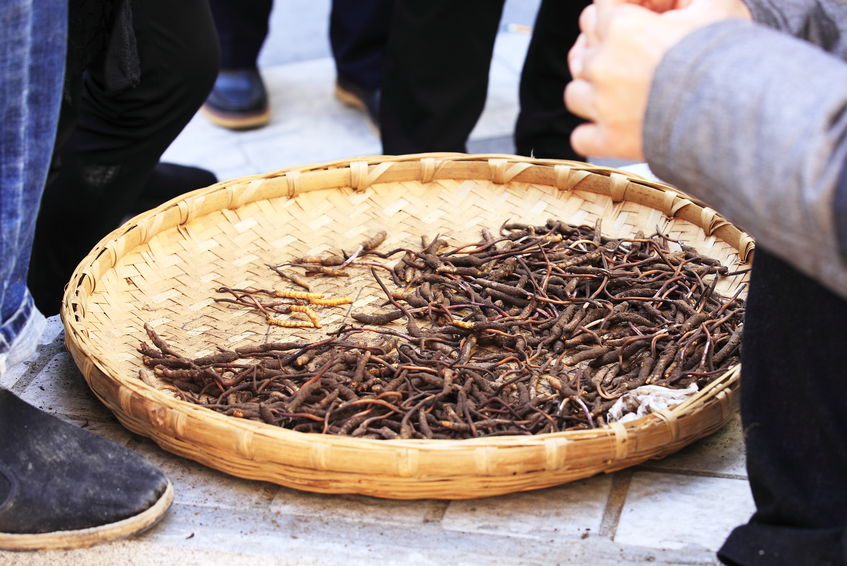 In China, Cordyceps sells for as much as $10,000 a pound, and over-harvesting is making this amazing mushroom even scarcer and more expensive as time goes by.

Since naturally grown Cordyceps is almost prohibitively expensive, growers have also found ways to grow the mushrooms in lab and farm settings, and cultivated Cordyceps are widely available in the form of extract powders, tinctures, capsules, and even as fresh mushrooms. 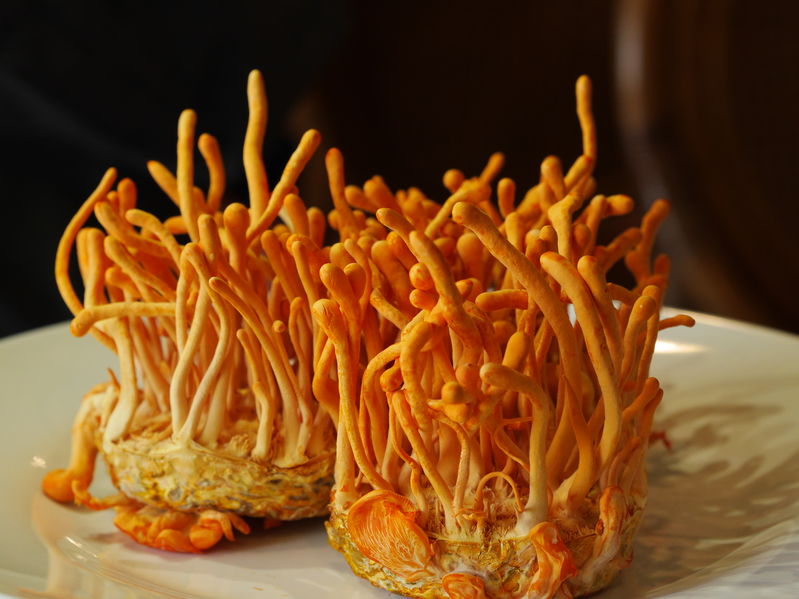 Also, cultivated cordyceps are much more affordable, and growers can produce them in larger quantities than are available in nature.

However, there is debate as to whether cultivated Cordyceps have the same health benefits as natural Cordyceps. Because cultivated Cordyceps is grown on rice, it has far more starch than wild Cordyceps, and may not have as many healthy compounds.   If you can find Cordyceps that is naturally grown as well as affordable — and you can stomach the idea of eating dead insets – then, by all means, go with the natural version.

The Health Benefits of Cordyceps

Out of the hundreds of known species of Cordyceps, only two have been tested extensively to see what health benefits they offer; Cordyceps Sinensis and Cordyceps Militaris.  Most testing has been on animals, but the results so far are promising. Hopefully, they will soon move on to human studies, and more information will become available.

So far, research indicates that Cordyceps may have the following health benefits:

There are no known side effects to taking Cordyceps, although experts warn that more tests are needed before they can say that it is completely safe to take. In China, Cordyceps has been approved as a safe, natural drug, and it is already in use in hospitals there.

How to Grow Cordyceps

Cordyceps are more complicated to cultivate than most mushrooms, and many growers are still trying to figure out easier processes.  I am no expert on cultivating cordyceps, so I won’t go into detail in this guide to Cordyceps Mushrooms. But if you are feeling adventurous, Fungi Ally has a great article on how to cultivate Cordyceps.

Also, this Youtube video from Mushroom Revival gives an extensive overview of how a farm in Deerfield, Massachusetts, cultivates Cordyceps.

How to Prepare and Use Cordyceps

You probably wouldn’t want to eat natural, insect-grown Cordyceps without cooking it, especially since it usually comes with the insects included.

But If you can get fresh cultivated Cordyceps, you will find that they are quite good, with a mild, sweet-savory taste.  They are long and spindly, so go well in pasta dishes, especially with cream-based sauces.

You can also dry fresh Cordyceps using a food dehydrator, or you can put them in your oven on low heat to dehydrate them.  See my article, How to Dry Mushrooms, A Complete Guide for more details.

To re-hydrate your cordyceps, soak them in hot water for 3-5 minutes.

If you can’t find fresh Cordyceps, there are plenty of Cordyceps extracts available.

Extract powder is probably the easiest way to integrate Cordyceps into your diet.  It has a mellow, slightly sweet taste so you can add it to just about any dish.  It’s particularly good in tea, coffee, and smoothies.  A bit of honey or ginger will go well with the Cordyceps taste.

I recommend Micro Ingredients Cordyceps Extract Powder.  I take it in my smoothies, and like its taste.

Freshcap Mushrooms Thrive 6 Mushroom Extract Powder is also a high-quality extract powder.  It also contains Lion’s Mane, Chaga, Turkey Tail, Reishi, and Maitake. If you like to take other mushroom extracts, this may be a good deal for you.

If you find that you don’t like the taste of Cordyceps extract powder, then tinctures might be a good alternative.  I like HawaiiPharm’s Super Concentrated Liquid Extract.

I hope you have learned something from this Guide to Cordyceps Mushrooms.  Many people share stories about the huge benefits they have received after taking Cordyceps. Researchers will need to complete further testing on humans in order to determine all of the benefits that Cordyceps may provide, but the results so far look very promising.

Why not try some Cordyceps and see what happens. You might be pleasantly surprised by the results.

Let me know your thoughts in the comment section below. 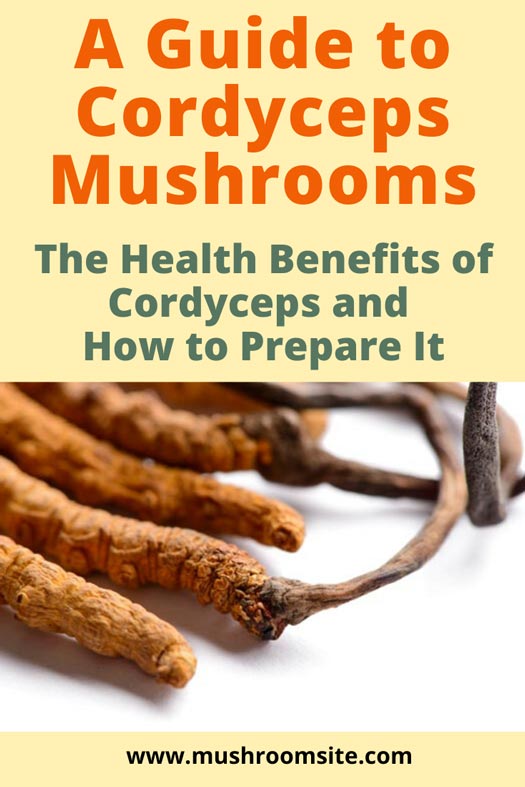 Mushrooms are the new health craze.  But many types of mushrooms that are reputed to have…