The Amazing Chaga — an Overview 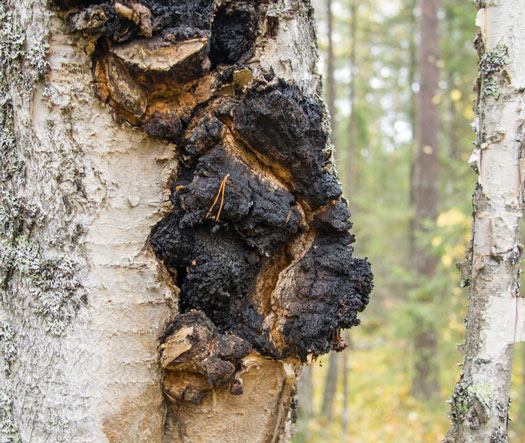 This article takes a look at the Amazing Chaga fungus, its health benefits, where it grows, what it looks like, how to harvest it, and how to prepare it.

Where does Chaga grow?

Chaga (Inonotus Obliquus) grows in colder climates in northern Europe, Canada, the northern parts of the United States, and Asia. Chaga grows mainly on birch trees, so if you live in an area with birches, you will likely have Chaga nearby too.

Chaga fungus sticks out from the white bark of birch trees as a dark brown, even blackish mass that looks like burnt charcoal. Because of its color, Chaga is also called Black Mass, Cinder Conk, Birch Canker, and Conk Rot.

Chaga is dark on the outside because it contains melanin that has been exposed to the sun.  This melanin is reputed to have health benefits of its own and is sold in supplements.  Inside, Chaga is a bright orange or deep golden color.

How To Harvest Chaga

If you are lucky enough to live in a place where birch trees grow, you will be able to harvest Chaga.  Below are the steps.

It is best to harvest Chaga in the late Fall and Winter.  During Spring and Summer, sap flows through the trees, so any Chaga will have too much liquid for you to be able to work with it.  It’s best until there have been a few sub-freezing nights, and the tree has become dormant for the Winter.

Chaga looks like a growth on the trunk of the birch tree.  Birches can also have what are called gnarls, but these are tumors and are full of wood, not fungus.  The birch gnarls are usually smooth and are the same color as the tree.   Chaga will be black and will have a rough surface. 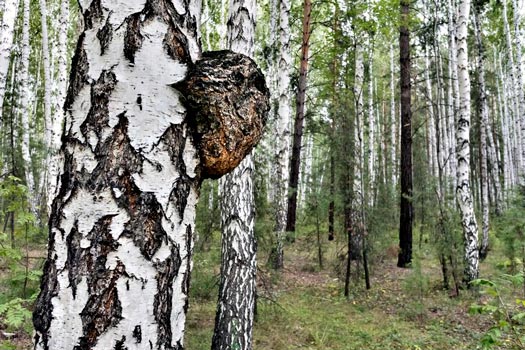 Make sure that the birch tree that you are harvesting Chaga from is alive.  Chaga is a parasitical mushroom and will kill its host, so once the tree is dead, the Chaga will die too  — and you don’t want to consume dead Chaga.

Also, it is best to harvest larger pieces that are at least the size of an apple.  Leave the smaller ones to grow.

Removing the Chaga from the Tree

Once you have confirmed that the tree is alive and the Chaga is big enough, you can cut it from the tree.  Chaga tends to come off quite easily, and you should be able to pull it off using a knife, or even your bare hands.

The Chaga will be golden brown on the interior, both on the piece that you cut off, and the part that remains on the tree.  Don’t cut into the tree, as you could kill it.  Also, leave some of the Chaga on the tree, maybe 15-20%, This will allow it to regrow so that you can come back in a couple of years (Chaga is a very slow grower) and harvest some more. 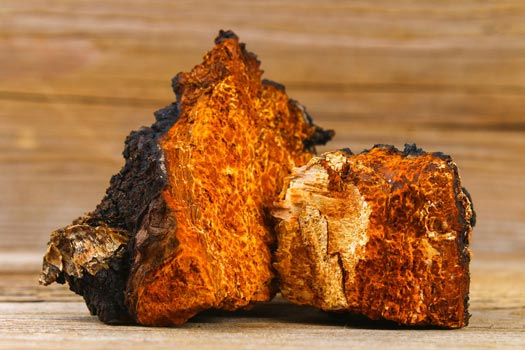 Once you have harvested the Chaga, you will need to dry it.  See further instructions below, in the section called “How to Prepare Chaga.”

Can You Grow Chaga at Home?

Many people who want to grow their own supply of Chaga ask, “How do you grow it at home?” The simple answer is, you can’t.  Growing Chaga depends on too many factors. First, you would need to live in the right climate, and then you would need birch trees.

But even if you can meet these two requirements, it takes up to twenty years for Chaga to form on a birch tree. Once it does form, the parasitic Chaga growth starts to kill the tree that it is growing on, which means that there is only a limited window for harvesting the fungus.

Once the tree is dead, the Chaga spores leave the tree to find a new host and the process begins all over again.

Chaga has been used as a medicine for centuries, especially in Siberia and Northern China, where practitioners have long believed that Chaga boosts the immune system and generally improves health.

In Norway, Chaga is called Kreftkjuke, which translates to something like ‘cancer fungus’ because of its purported health benefits.

Chaga contains a wide variety of minerals and nutrients and is especially high in Vitamin D and calcium.

Chaga also contains a large number of antioxidants, which may slow the aging process.  These antioxidants may also reduce “bad” cholesterol, which could be useful in fighting heart disease.  They also have strong anti-inflammatory and immune balancing properties

Early research indicates that Chaga may have anti-cancer properties as well. Tests have been done on animals, but further research on humans needs to be done.

Side Effects of Chaga

Always discuss supplement use with your medical practitioner, as they can help you understand the benefits and side effects associated with Chaga and other supplements.

How to Prepare Chaga

Should you ever happen upon fresh Chaga, remember that it isn’t like regular mushrooms. You can’t just sauté it or throw pieces into stews and casseroles.  Although Chaga is a fungus, the cell walls are made of a very hard substance called ‘Chitin,’ which is not digestible.  Which means that this is not a regular cooking mushroom.

To make the Chaga usable, you will first need to cut it into small chunks, using either a sharp knife or a hand saw.  Do this soon after harvesting it, because the more time that passes from harvest, the more difficult the Chaga will be to work with. Just a couple weeks after harvest, it will be as hard as a rock.

Then, place the small Chaga pieces onto a flat pan and put the pan in a warm, dry place for a few days, like near a wood stove or by a window with lots of sun.  DO NOT PUT THE CHAGA PIECES IN THE OVEN.  Chaga has a very low burn temperature and catches fire easily.

You can also put the Chaga chunks in a food dehydrator, but make sure you don’t put the temperature above 120 degrees Fahrenheit.

Stored in a sealed jar, the dried Chaga pieces will keep their medicinal properties for years.

If you don’t have a source of fresh Chaga, you can buy dried Chaga, also called Chaga chunks, from some specialty grocery stores and also online.

Or you can follow the easiest method, which is to simply buy harvested Chaga pieces online.  We like Atomic Nature’s Wild Canadian Chaga Mushroom Chunks.

How to Make Chaga Tea

You can make tea from the dried Chaga chunks, or you can grind your Chaga pieces into a powder.  You can do this by putting them into a coffee grinder or with a mortar and pestle.

Chaga powder does not dissolve, so it is best to put the powder into a tea infuser or reusable teabags, and then steep it in hot water.  You can also steep dried Chaga chunks, but it will take much longer. 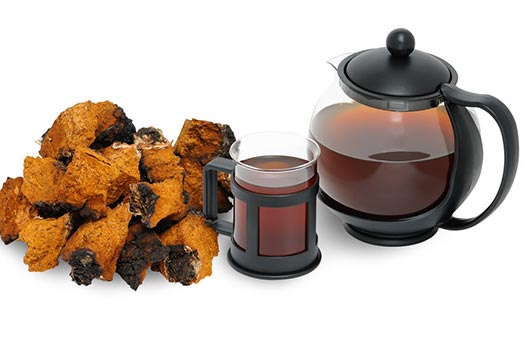 Here is a very simple recipe for Chaga tea.

After 5 minutes, your tea will be ready to drink.  Let it steep up to 10 minutes if you like your tea stronger.

Save the powdered Chaga in the tea infuser. You will be able to use to make one more batch of tea, although you might want to let the second batch steep a bit longer.

Chaga tea can be stored in the fridge for two to three days, and tastes just as good cold as it does hot.

You can also buy Chaga tea with the powder already in the tea bags.  These pre-made tea bags give you a simple way to consume your Chaga at work or while traveling.

We like Sayan Siberian Chaga Mushroom Tea. The box includes 20 tea bags, which contain a blend of both raw Chaga powder, and Chaga extract powder.   It has a nice woodsy flavor.

You can buy coffee with Chaga already added. Usually, Chaga coffee will come with a mix of other healthy mushrooms, such as Lion’s Mane and Cordyceps, so you will get the health benefits of each type of mushroom.

Other ways to take Chaga

It’s best not to consume ground fresh or dried Chaga directly.  As mentioned above, the cell walls of Chaga are made of a very hard substance called ‘Chitin,’ which is not digestible.

Teaveli Premium Chaga Mushroom Powder  Like all Chaga powder extracts, this is best added to coffee or tea, as it is quite bitter.

You can also buy Chaga tincture, which you can add to fruit juice, smoothies, water, tea or coffee.

We like Naturealm Chaga Mushroom Extract, which is harvested from birch trees in Alaska.

How to Store Chaga

Keep Chaga chunks and powder in an airtight container out of direct light and away from excess heat.  Stored this way, it will last for many months.

You can keep Chaga tea or coffee in the refrigerator for a day or two. Any longer than that, and you lose the benefits. You can always freeze and defrost it if you wish to keep it for longer.

I hope you have learned something useful about the amazing Chaga fungus.  If you’re interested in the medicinal benefits of other mushrooms, check out our article Medicinal Mushrooms You Can Cook With.

And if you’d like to learn about foraging for mushrooms, read our article Mushroom Foraging — The Ultimate Guide. 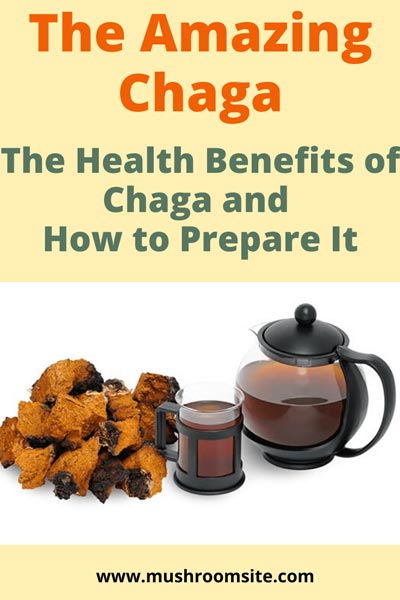 The Best 8 Mushroom Grow Kits to Grow on Your Own

If you love eating mushrooms and want to learn how to grow them at home, you’re…

You may know that mushrooms are not plants. But the puzzling thing is, how do these…